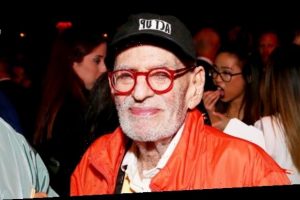 After activist and playwright Larry Kramer’s husband died on May 27, actors who starred in, or were just inspired by his incredible works honored the hero. ‘The Normal Heart’ stars Julia Roberts was just one.

The theater world experienced an astronomical loss on May 27, when it was announced that iconic playwright Larry Kramer had passed away. Kramer, 84, was a treasured writer, a tireless gay rights activist, and the founder of the Gay Men’s Health Crisis, and organization founded in the 1980s to assist those with HIV/AIDs when nobody else would. Kramer’s contributions to theater are limitless, but he’s best known for his play The Normal Heart, which centers upon a writer in 1980s New York City and his friends banding together to tell the stories of the emerging AIDs crisis in the gay community. Kramer died of pneumonia, his husband, David Webster, told The New York Times. Stars of Broadway and beyond flocked to social media that day to mourn his death.

Hamilton creator Lin-Manuel Miranda tweeted, “Don’t know a soul who saw or read The Normal Heart and came away unmoved, unchanged. What an extraordinary writer, what a life. Thank you, Larry Kramer.” He included a beautiful black and white shot of Larry. Matt Bomer, who had a starring role in the 2014 HBO adaptation of The Normal Heart, posted a photo of himself with the playwright on Instagram. “Larry Kramer. I don’t have the words to properly express my gratitude, admiration , and love for you. Your writing was bold, courageous, and urgent. It educated, stirred people to action, and saved lives. A towering intellect and an amazing wit. My time with you is something I will treasure for the rest of my life. Rest In Peace my friend,” he wrote as the caption.

Julia Roberts, who starred alongside Bomer in The Normal Heart, paid tribute to Kramer via a statement to our sister site, Variety. “He was ferocious and tireless in his beliefs. A true hero that so many people owe their lives to today. “I was honored to spend time in his orbit,” the actress said. Rob Reiner had nothing but beautiful things to say about his one time co-star after his passing, tweeting, “Sad to hear of Larry Kramer’s passing. We shared the stage in [Dustin] Lance Black’s play, ‘8’ which highlighted our fight for marriage equality. He was a fierce advocate for gay rights. He and his passionate voice will be missed.” Black, in turn, wrote, “When so much of the world refused to see any value in our beating hearts, Larry Kramer’s rage helped lift us out of invisibility. It was an honor to know him. Today, our movement has lost one of its greatest fighters. Tonight, shout it so he can hear it: #ActUpFightBackEndAIDS”.

The tributes continued to roll in throughout the day,  making it even more apparent how beloved this man truly was. Stars like Rosie O’Donnell, Chelsea Clinton, Janet Mock, Kristen Johnston, Pedro Pascal, Olivia Wilde, and Andy Cohen all honored him. Mia Farrow wrote, “We have lost a great man. Larry Kramer was a magnificent force whose intellect, heart & outrage awakened the nation to the horrors & losses of AIDS, the need for treatment & the inexcusable apathy of the Reagan WH. Love to David Webster, his husband,” adding a broken heart emoji.