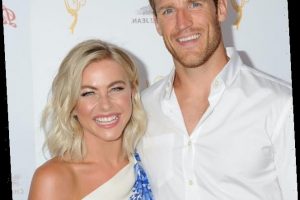 It is all over for Julianne Hough and Brooks Laich.

Officially and, soon to be, legally, we should say.

On Monday, Hough has filed for divorce from her estranged husband, five months after the couple announced its separation.

“They were trying to work on things but Julianne realized she’s happier having her freedom,” a source told People Magazine, while The Blast confirms Hough filed her papers in Los Angeles.

“Brooks tried to give it to her but he also hit his limit,” this same source added.

Neither Julianne nor Brooks has spoken out in public about the split.

However, both sides of the now-former twosome made it pretty clear in the past that this relationship had run its course.

In August 2019, for example, Hough actually came out as gay.

Speaking to Women’s Health at the time, the former Dancing with the Stars professional explained that she had told Laich that she was “not straight.”

“I was like, ‘I’m not. But I choose to be with you,'” Hough said she told Laich four months after their wedding.

“I think there’s a safety with my husband now that I’m unpacking all of this,” Hough continued.

“And there’s no fear of voicing things that I’ve been afraid to admit or that I’ve had shame or guilt about because of what I’ve been told or how I was raised.”

Fast forward to this past January… and Laich confirming that he, too, was exploring his sexuality.

“I want to learn more about intimacy and my sexuality,” Brooks admitted in his Instagram Story.

We applaud anyone for doing this, of course, but looking into one’s sexuality while married?!? Red flags were raised by many back then.

According to those in the know, they had also been social distancing separately during the COVID-19 pandemic, with Laich in Idaho and Hough at home in Los Angeles.

“We have lovingly and carefully taken the time we have needed to arrive at our decision to separate,” they said in a joint statement in May.

“We share an abundance of love and respect for one another and will continue to lead with our hearts from that place. We kindly request your compassion and respect for our privacy moving forward.”

Despite this announcement, the pair appeared to remain on decent terms.

Laich, for example, celebrated his birthday in June with Hough’s brother Derek — and he was also a guest at a pool party celebrating his wife’s birthday in July.

Amid her relationship drama, though, Hough once shared a mysterious message about “feeling stuck, depressed, anxious, or hopeless.”

Moreover, she dyed her hair brown in what seemed to be a reflection of her mental state..

In the end, it really does look as if Hough as evolved as a person and her romance simply couldn’t survive any longer as a result.

“She is a deeply different person than she was when they got married, and she is proud of those differences and changes she’s made and she doesn’t want to go back,” a Hough insider told People in June.

“He is the man he is, and he shouldn’t change a thing.”

We wish both Brooks and Julianne the best going forward.

END_OF_DOCUMENT_TOKEN_TO_BE_REPLACED

END_OF_DOCUMENT_TOKEN_TO_BE_REPLACED
We and our partners use cookies on this site to improve our service, perform analytics, personalize advertising, measure advertising performance, and remember website preferences.Ok