Justin Baldoni Knows the Dark Side of Being a Sex Symbol

It’s 11:00 p.m., we’re six months into a global pandemic, I’m eating a bowl of cereal and potato chips while weighing in at a healthy ten pounds heavier than usual. I’m also carrying the weight of needing to finish postproduction on my film, Clouds, while launching a movie studio, and trying, and failing, to show up as a husband and dad.

No big deal, right? You’d think if there was ever a time to be a little extra kind to myself and my body, now would be it. After all, on the scale of importance, a six-pack and broad shoulders fall a few notches below everything else that comes with a global health crisis. Yet it’s not that simple. For most of my life, the relationship I’ve had with my body has been complicated and confusing. My confidence and self-worth have, for as long as I can remember, been linked to the way I feel about my body and the way I perceive how the world sees me.

As someone who for years has made a living taking off their shirt on television, I am acutely aware of the privilege I have simply for having the genes and resources that I do. And yet, under whatever amount of muscle definition I think have or do not have, is a little boy who feels like his body will never measure up, a young adult who struggled with terrible body image, and a man who, to this day, suffers from a problem that he helps perpetuate.

About fifteen years ago, I got my first big job on the show Everwood. I had been acting for less than a year and, let’s be honest, I wasn’t that good. Combine my subpar acting chops with the network announcing that the show may be in its final season, meant one thing: my character, who was originally set up to be substantial, had to go. 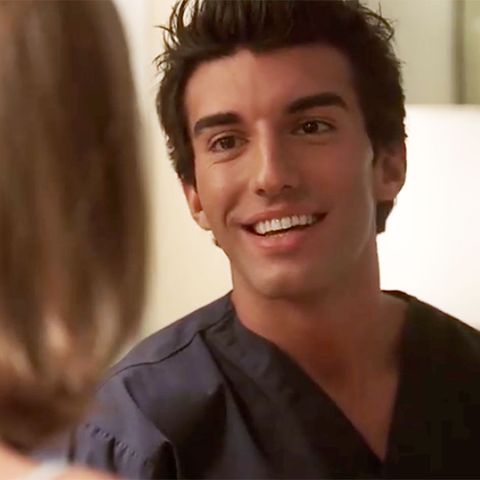 I found myself with fewer and fewer lines, while also wearing less and less clothing. I ended up as largely comical relief, even doing a scene in which I was doing push-ups in the background as the two main characters talked about something serious, while commenting on my strange behavior. But hey, I was twenty-one and blessed to be making a living.

But at what cost?

The Message of Worth

What people didn’t know about that shirtless medical student was that behind the scenes, the guy playing him wouldn’t eat carbs for weeks before he had to be shirtless in front of the camera. He’d be at the gym for hours a day and wouldn’t drink water on shoot days so he could look more ripped. He was subconsciously depressed, lonely, and was obsessing over muscle mass and body fat percentage because he felt his only value on the show (his job, his source of income) was solely dependent on his physical appearance—a message that was reinforced in the weekly reviews of the show.

I wish I could tell you that ten years later, after quitting acting to dive into directing and producing meaningful content, like documentaries about incredible people living with terminal illnesses, that I worked through some of this and gained some perspective in regard to my body’s real worth—my real worth. But, I can’t.

Ten years later, when I fell back into acting, I found myself in the exact same situation on the set of Jane the Virgin. But this time the pressure felt heavier as I was the lead male on a global phenomenon, working alongside an award-winning acting juggernaut, with social media and the new fad of slow-motion GIFs weighing in on my worth.

The message is the same: our body determines our worth. Our muscle size, penis size, shoulder size, and waist size carry the weight of our worth. And if our body falls outside of the mold society has constructed as “hot/sexy/fit/attractive,” then we are seen as “not enough.” At the same time, if our body falls into that mold (where there is definite privilege that comes with fitting in it), then we are good—then I am good, even if I am standing in front of you telling you that I am struggling.

I’m tired. I’m so damn tired of it. I’m part of the problem, and I’m also suffering, and those two things are not exclusive. We have to talk about these things and bring the deeply rooted messages out in the open, so we can dissect them and reframe them. But where do we start?

Dr. Roberto Olivardia, Ph.D., a clinical psychologist at Harvard Medical School, suggests that everyone could benefit from beginning to take a mindful assessment of their body image talk. We all do it, and this internal monologue either promotes a positive body image or perpetuates a negative one.

Some examples of negative self-talk are, “Oh if this was just a little more of this, or that was bigger or smaller or . . .” It’s talk that is not affirming, talk that constantly feeds us the idea that our body is not good enough on some level.

For me, it made sense to look toward my children to help me change my dialogue. With my kids, I focus on what their bodies allow them to do. “Look how your legs help you run so fast!” “Your arms are working so hard on the monkey bars!” If I catch myself talking shit about my own body, I try to internally affirm my arms for being able to throw my son up in the air, or I’ll try to appreciate my legs for allowing me to chase them all over the house.

Another simple practice I’ve introduced is complimenting one part of my body when I look in the mirror, instead of doing what feels normal, which is criticizing multiple parts of my body. I don’t always succeed at this, but I try! Often times when my wife catches me being hard on myself, she’ll say, “Be nice to my husband.” So I try to bring some of her radical acceptance of me into my own self-talk and as awkward as it may feel, I’ll compliment my hair, my eyes, and sometimes even how my ass looks. (Why does that feel weird for me to type as a man?)

If you’re like me, you also may find yourself consuming images (through social media and entertainment) that while meant to inspire you, trigger you into a negative conversation with your body and the feeling that you aren’t enough as you are. Anything that clearly isn’t about health anymore is an indication that there might be something that needs healing in the way we see ourselves.

One of the tools I utilize the most to help check myself is this concept of the Why Ladder. It’s about taking a brief pause and asking myself why, and then why again, and then maybe why again. It’s not just something I do for my exercise and eating habits, it’s something I try to use in all areas of my life. It’s about climbing the why ladder as a way to check, and challenge, my intention.

Why do I want to work out? Because I am feeling stressed and I want to release some of that energy from my day. Why? Because I know that my mind and body are connected and when I move my body and sweat, I feel better.

Or maybe another day the answer is that I want to work out because I want to be stronger so that I look “good” or “better.” Why? Is it because I am feeling a bit insecure that I’m aging? Why? Because I’m worried about how I’m going to pay my mortgage next year if the next movie I direct bombs, and I need to stay fit in case I need to act again because my value as an actor in Hollywood is dependent on how I look versus how skilled I am.

So now that I know I’m wanting to work out because deep down I am feeling insecure, I can start to address the real reason, while choosing to work out because I want to, not because I feel I have to. It also doesn’t have to be a long process; one “why” can get you there and the mental check can happen in seconds. You see, the why ladder isn’t about perfection, it’s about being curious of my thoughts, mindful about my actions, as well as keeping the messages I’m feeding on more aligned with what feels most healthy for me.

And what are those messages that I want to be most true in my mind and actions? I have the body of a man, but my body doesn’t determine my worth as a man. My body does not need to be man enough to be enough; who I am, who God made me to be, as I am, is enough.