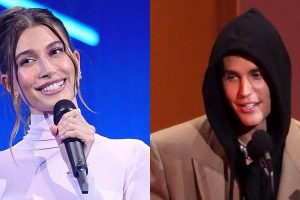 It doesn’t look like Justin and Hailey Bieber coordinated their outfits for the VMAs.

The 27-year-old singer and the 24-year-old singer both made appearances at the 2021 MTV Video Music Awards on Sunday night (September 12) at the Barclays Center in New York City.

Hailey introduced a performance from Kacey Musgraves while wearing a chic dress.

Justin opened the show with a performance of his songs “Stay” and “Ghost.” He then appeared on stage to accept the awards for Best Pop and Artist of the Year while wearing an oversized coat, a hoodie, and baggy jeans. Their outfits were definitely not coordinated!

FYI: Justin is wearing Balenciaga. Hailey is wearing a sheer pale pink dress made of silk from Alaia.