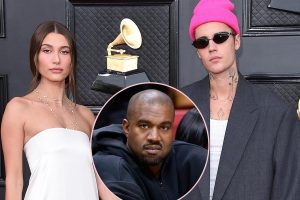 Justin Bieber is cutting ties with Kanye West after the rapper attacked Hailey Bieber on social media this week!

As you may know, the drama started at his YZY show during Paris Fashion Week on Monday when Ye wore a shirt with the white supremacist hate slogan, “White Lives Matter.” The runway piece soon sparked criticism amongst social media users, including Vogue editor Gabriella Karefa-Johnson, who condemned Kanye for his irresponsible and harmful actions. Of course, the Stronger artist did not take the call-out well, and proceeded to mock and attack the journalist on Instagram. However, Hailey and Gigi Hadid soon rushed to her defense. The Rhode Skin founder specifically sent a message of support to Gabriella, writing on Instagram Stories:

“My respect for you runs deep my friend! to know you is to adore you and to work with you is an honor. the most kind. the most talented. the most fun. the most chic.”

Even though Hailey never mentioned Kanye in the post, he still got upset over her remarks and dragged Justin into the situation, saying:

“THOSE BOOTS GAB WAS WEARING WERE F**KING TRAAAAAAAAAAASH BUT I’M SURE JOHN LEGEND STILL WANTS A PAIR. AND JUSTIN GET YOUR GIRL BEFORE I GET MAD.”

“Wait am I canceled again??? Justin please let me know”

And it did not stop there. Kanye went on to call the 25-year-old “nose job Hailey Baldloose” in a post on Thursday, writing:

“Vinetria you are the culture’s favorite ‘THEEYYY’ threw a mask on you at YZY SZN 9 when I wasn’t looking ‘THEEYY’ don’t want undeniable beautiful Black women to be put on their rightful throne. They want corny ass Gigi Hadid and nose job Hailey Baldloose to rally behind an obvious Corey Gamble level nonfashion industry plant.”

Whoa… Following the online attack, it sounds like Kanye has completely crossed a line with his longtime friend JB to the point where the Peaches artist is reportedly done with him!

According to TMZ on Saturday, sources claimed he and Hailey are understandably “hurt” by the 45-year-old fashion designer’s comments as they’ve been nothing but supportive to him for years, especially when he was going through a hard time in 2020. The insiders said they feel Kanye went “too far” as Hailey never attacked him when defending Gabriella after he publicly went off on the editor. So now, TMZ reported, the 28-year-old singer feels he has to stand up for Hailey and can no longer continue a friendship with Kanye.

That is understandable after the disgusting things Kanye said about Hailey! Reactions, Perezcious readers? Let us know in the comments.