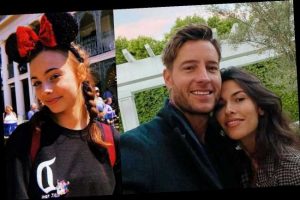 The ‘This Is Us’ actor and his new girlfriend have gone public with their new relationship ahead of New Year celebration and his daughter Isabella give her blessing.

AceShowbiz –Justin Hartley and Sofia Pernas went public with their romance on social media. The “This Is Us” actor and his new girlfriend posted pictures together and posted them on their Instagram as they were gearing up to usher in the New Year.

“Last minutes of 2020 here in LA. Bring on 2021! Happy New Year!” Justin wrote in his caption and his girlfriend penned a similar note on her own page, “Sayonara 2020, it’s been real. Happy New Year from our quarantine den to yours.”

The couple received love and congratulation from their fans and followers. But one that stood out was a comment from his 16-year-old daughter Isabella. The teen seemingly approved of her father’s new relationship as she exclaimed, “Happy new year!!!”

Justin Hartley and Sofia Pernas were first romantically linked in summer 2020 amid his nasty divorce battle with estranged wife Chrishell Stause. He filed for divorce from the “Selling Sunset” star in November 2019 after two years of marriage.

It’s unclear what led to their breakup, but Justin cited irreconcilable differences while Chrishell insinuated that her estranged husband cheated on her with Sofia. The reality TV star also took aim at the actor numerous times for allegedly calling off their marriage via text.

While Justin kept mum, his ex-wife Lindsay who’s also the mother of his daughter Isabella came to his defense amid online backlash against him on the internet.

Without mentioning his bitter split from Chrishell, Lindsay wrote on her Instagram, “I appreciate my ex-husband Justin for not only being [an] exemplification of a solid man but for being my dear friend and devoted father to our daughter.”

She added, “No matter what conflicts Justin and I had in the past, I appreciate what we have today and I am thankful for the family we have built.”