Home » Celebrities » JWoww: If Snooki’s Quitting Jersey Shore, So Am I!

JWoww: If Snooki’s Quitting Jersey Shore, So Am I! 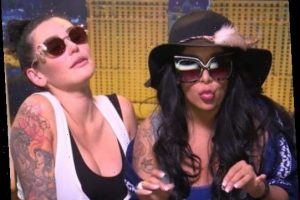 After months of build-up, we finally got to see the aftermath of the infamous roast at Angelina Pivarnick’s wedding.

We guess it was bound to feel a little anti-climactic, what with Jersey Shore producers making the baffling decision to devote a month’s worth of episodes to the wedding of a cast member who was barely a part of the original series.

Still, despite the fact that we learned more about Angelina’s big day than we ever needed or cared to, there were some interesting takeaways from one of the most built-up storylines in reality TV history.

On top of that, the offending bridesmaids — well, Deena, to be specific — made matters far worse after the fact by sulking, complaining, and drunkenly trying to force Angelina to accept an apology.

Of course, the biggest consequence of Chris and Angelina’s wedding was the fact that it led to a decision that could mean the end of Jersey Shore as we know it.

Largely as a response to the criticism she received for her participation in the reception speech, Nicole “Snooki” Polizzi is retiring from the show that made her famous.

She announced her decision back in December of last year and she confirmed it again on Thursday night.

“Last episode tonight…Love and appreciate you all!” Snooki tweeted ahead of the episode.

This prompted an unexpected response from Snooks’ BFF Jenni “JWoww” Farley who used the occasion to more or less announce her own retirement.

“There’s no Jwoww without my Snooki.”

From there, Jenni did some venting and revealed that she believes it’s Angelina’s fault that Nicole is quitting.

“I watched my best friend quit [the show] because she couldn’t handle the stress,” JWoww tweeted.

“I stayed up so many nights hearing Deena cry over being called names she didn’t deserve. All while Angelina basked in the attention she was given. 7 months I waited for tonight.”

Well, it wasn’t quite that one-sided.

Yes, Angelina probably could have been a bit more forgiving, but the ladies did throw some pretty nasty insults her way in front of her entire family.

Then again, the best man’s speech was almost as bad, and he seemed to suffer no consequences of any kind.

“Ehh..this whole thing was the absolute last straw for me,” Snooki wrote.

“I refuse to leave me family to be treated like I’m the issue and bad person when in my heart i know i am nothing but a loving and loyal friend.”

Nicole later added, I’m embarrassed and so glad to be leaving the show due to this insanity.”

It’s unclear if Jenni’s retweet was a way of doubling down on her own retirement announcement — but fans certainly took it that way.

“Are you really going to quit too Jwow NOOOOO we can’t lose both of you!?” one fan replied.

“But would understand if you did… Hoping you will stay we love you Jenny!”

“Ugh no no both of you reconsider. just get rid of that dirty hamster!” another chimed in.

Obviously, it remains to be seen if Snooki and JWoww are both actually done with the show, or if there’s an amount of money that producers can wave in front of them to draw them back in front of the camera for at least one more season.

But as heartbreaking as the idea of a Snook-less future might seem to fans, this might not be such a bad time for Jenni and Nicole to hang up their party beads.

The most recent season was widely regarded as the show’s most lackluster to date, and many viewers expressed frustration with the seemingly endless filler episodes in which nothing much happened.

Ratings for Jersey Bore may have remained more-or-less consistent, but that seems to have more to do with the coronavirus lockdown than with the content on offer.

MTV has yet to reveal if there will be another season of the show, but if they decide to proceed without Snooki, they’ll have at least two cast members on board.

We’d say it would be tough to produce an entire season with just those two, but with the show’s new, lower standards, we’re pretty sure producers could wring ten episodes out of Pauly D talking to a bottle of hair gel.