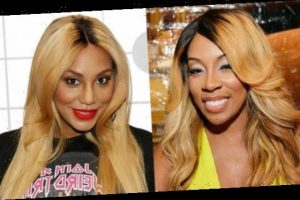 Tamar Braxton’s opinionated personality has gotten her into a few tifts. She’s argued with her sisters on Braxton Family Values and has had feuds with other celebrities. One of her most intense and longstanding feuds was with fellow singer, K. Michelle. Braxton even cried over remarks K. Michelle made about her on national television. The two women ended their feud a few years later but it’s been reignited and K. Michelle isn’t holding anything back.

In a recent interview, she explained feeling slighted by Braxton and makes shocking accusations about Braxton having an affair with a record executive.

Their initial feud started when Tamar Braxton hinted she did not believe K. Michelle’s claims of domestic abuse

When K. Michelle was a cast member on Love & Hip Hop: Atlanta, she made accusations against an ex-boyfriend, alleging that he was physically abusive during their time together and played a part in having her blackballed after their breakup. At the time, she did not name the alleged culprit, but fans later discovered she was talking about former A&R of Jive Records, Memphitz.

Memphitz vehemently denied K. Michelle’s claims, though court records would later prove that K. Michelle was truthful in her account. Braxton interjected and hinted that she did not believe K. Michelle, claiming that she was close friends with Memphitz and his then-wife, Toya Wright.

Braxton sent out a subtle tweet as an episode of Love & Hip Hop: Atlanta aired of K. Michelle recounting the abuse, telling Wright, “Oh have fun and let this girl sell her fairytale.”

Subtweets between Braxton and K. Michelle were sent back and forth until Braxton sent K. Michelle a cease and desist, claiming that she felt threatened.

Tamar Braxton and K. Michelle buried the hatchet with a performance at the 2015 BET Awards

The feuding between the two singers continued for years after the initial spat. K. Michelle accused Braxton of copying her personal style, alleging that Braxton used the same wig maker as she did.

Braxton took jabs at K. Michelle during an appearance on The Arsenio Hall Show. when the talk show host asked Braxton about their issues, Braxton responded, “Who? K Mart, where they sell Nicki’s clothes at. That’s the only K, I know.”

K. Michelle attempted to squash their beef multiple times, even once saying that she admired Braxton’s work as a singer. But, Braxton continued to shoot her down, claiming that K. Michelle bullied her.

They shocked many when they performed together during the 2015 BET Awards, appearing to make amends. Braxton later told Angie Martinez that though they made a truce to be cordial, that she and K. Michelle were not friends.

“Let me just be honest about it. That weekend is the first time I met her. We not [sic] homies… we’re just cordial. BET did put us together and it wasn’t awkward, but yes it was awkward at first, but she sang, I sang, then we went home. We didn’t go out for dinner or drinks, you know what I’m saying? There’s just no beef,” Braxton said.

K. Michelle later told B. Scott that the situation with Braxton was “unimportant” and that she’d never get past Braxton accusing her of lying about being abused. But, K. Michelle promised to continue to support Braxton as a singer.

K. Michelle makes a new shocking claim that Tamar Braxton had an affair with a music executive

During the live, K. Michelle referred to Braxton as a muppet, something she famously said before that Braxton cried about during her time on The Real.

But the most damaging accusation from K. Michelle about Braxton was revealed when K. Michelle chatted with Madison in a recent show. According to K. Michelle, Braxton once had an affair with Michael Mauldin, a music record executive and the father of super-producer, Jermaine Dupri.

Braxton has yet to respond to K. Michelle or address the allegations about her having an affair. She did speak with Claudia Jordan recently and insisted she has no intention of having any feuds with anyone, so maybe Braxton will take the high road.