Kailyn Lowry: I Don’t Want to Go to Jail For Assaulting Chris Lopez! 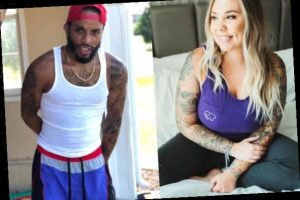 Well, these are tense times for everyone, and it seems that’s doubly true of Kailyn Lowry,

As you’ve likely heard by now, Lowry was arrested for assaulting Chris Lopez in September, and it seems she’s deeply concerned about the potential legal consequences that may follow.

On the latest episode of her Baby Mamas No Drama podcast, Kail revealed that she currently has six lawyers on retainer.

While we’re sure they won’t all be helping her fight the assault charges against her, it’s clear that Kail is largely motivated by two main fears these days:

Of course, she doesn’t have to worry about the latter when it comes to her two youngest sons, as their father, Chris Lopez, doesn’t seem to want much to do with them.

Anyway, Kail opened up on her legal situation during a conversation with co-host Vee Torres, who is currently married to Kail’s first baby daddy, Jo Rivera.

“I am not fighting with nobody — you know what — 2021, Vee, I am not even f–king playing, I am done paying attorneys,” Lowry said.

“I have six attorneys and when I tell you I am done paying all of them, unless it is related to my f–king businesses, I am DONE, I am DONE. We working this sh-t OUT!!!”

As for sticking to the terms of her custody arrangements, Kail says “court orders have been very helpful”

“I have gone through phases where I was feeling kind of bitter or I was upset or I thought about using the kid as a pawn, but the court order never allowed me to do that,” she told Torres.

“In that respect I think they are very important. I don’t know about you, but I don’t want the cops called on me because I didn’t give my kid to their dad, you know what I mean?” Lowry continued.

While court orders might be necessary to keep all parties in line, Kail says the current arrangement is satisfactory.

As for the assault situation, it seems Lowry became upset when Lopez cut their son’s hair without permission back in September.

Lowry was arrested for repeatedly punching Lopez, though she denies ever laying a hand on him during their argument.

She was released on her own recognizance, and the date of her trial remains unknown.

Briana DeJesus: Kailyn Lowry Is a Friendless Loser Who Beats Her BoyfriendsStart Gallery