Kaitlyn Bristowe Rushes to Defense of Clayton Echard: Hey, I Slept with Multiple Suitors, Too! 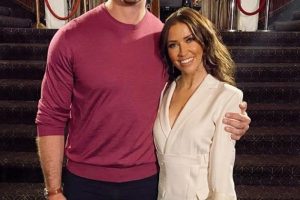 She, too, was once the lead of The Bachelor/Bachelorette franchise.

And she, too, once took full advantage of the blank check basically given to these leads on Fantasy Suite week, going to bed with multiple contestants back on Season 11.

Why is this relevant at the moment?

Because Echard slept with a pair of contestants on Tuesday night, Gabby and Rachel.

He then told his third remaining contestant about these bedroom dalliances… only to sit back in shock when Susie responded by asking off the show.

“If you feel like you’re in love with me, it doesn’t make sense to me to sleep with somebody else,” she told Clayton on air.

Echard then walked Susie to the car, but not before calling her out for this “BS” behavior, saying he wished she had told him about her whole stance on love and sex prior to the Fantasy Suites.

Clayton has since admitted that he handled the situation poorly — but Bristowe doesn’t necessarily agree.

“You genuinely fall in love with more [than one] person, so why would you not be intimate with more than one person and when you’re trying to find the person to spend the rest of your life with?

“Why do we judge so hard on this?”

The answer is obvious.

But also a tad bit complicated.

But is the Bachelor real life? Should Susie have understood what she was getting into? Was Clayton’s mistake telling all three finalists he was in love with them?

For her part, Kaitlyn, pointed out that the former football player is “taking every relationship as far as they can go” before proposing, which may include intercourse.

“I would even care to say that it’s more heartbreaking to meet somebody’s family and then break up with them than it is to be intimate with them,” she continued.

“Take it for what it is, but it’s just my opinion. The show is to find someone to spend the rest of your life with.

“If intimacy is important to you, that’s going to be part of it. And that’s a conversation that you should have with the Bachelor or the Bachelorette when you start to fall in love with them.”

Bristowe, it’s worth noting, slept with more than one man back during her run as The Bachelorette.

She concluded by stating that the fault for this miscommunication lies with Susie, not Clayton:

“In my opinion, these women should have had that conversation before the fantasy suite, like, ‘Hey, this is either OK with me or it’s not.’ And if you’ve set those boundaries, then that’s a much different story.”

Kaitlyn has been consistent with this take, too.

The Dancing With the Stars champion even shared a clip from season 19 of The Bachelor in which guest Jimmy Kimmel asked her – in front of lead Chris Soules — whether she would be mad if the farmer had sex with all three of his finalists.

“You can’t take out a car without test driving it.”