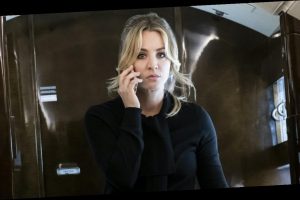 The actress achieved a career milestone on Wednesday, earning her first-ever Globe nomination for her mind-bending performance as a flight attendant caught in the middle of a twisty, chaotic murder mystery in HBO Max’s dark comedic thriller, The Flight Attendant. This marks her first major award nomination for her acting work.

Shockingly, Cuoco never scored individual recognition at any of the major awards shows, including the Golden Globes, for her 12-season run as Penny on The Big Bang Theory. (Cuoco and her Big Bang Theory castmates did snag six straight ensemble nominations at the Screen Actors Guild Awards, from 2012 to 2017.)

The Globes comes after Cuoco was recently nominated for two Critics’ Choice TV Awards for The Flight Attendant, one as an executive producer (Best Comedy Series) and one as an actor (Best Actress in a Comedy Series).

Ahead of the series’ premiere, Cuoco opened up to ET about shedding her Big Bang Theory persona to play a woman who is, for all intents and purposes, a hot mess.

“I loved everything about her,” she said. “Obviously, this girl struggles and she’s got a lot of emotional turmoil, and as we find out in the eight episodes, a lot goes back to her childhood, which is something she’s been running from her entire life. And alcohol is what makes her escape from what has truly happened to her. The trauma of waking up [after] this murder, it’s just adding on and bringing her back to her childhood.”

Adapted from Chris Bohjalian’s 2018 novel, The Flight Attendant stars Cuoco as Cassie Bowden, a flight attendant who wakes up after a drunken evening of debauchery and sex with a handsome stranger (Michiel Huisman), only to find him gruesomely murdered. Without any recollection of what happened or if she had anything do with his death, Cassie goes down a dangerous spiral as her past demons resurface amid her search for the truth.

“I got to play so many different emotions that I’ve never been able to do before. I’ve never had the opportunity, so this was my time,” Cuoco told ET. “In the last few episodes, she really hits rock bottom and I think I went into the hair and makeup room maybe twice ’cause we just kind of let everything go. And it was so cool ’cause it felt so real and authentic. I’m like, shouldn’t look her best. This is not [that], you know what I mean? So it was kind of cool to get authentic and real and play it as real as I possibly could.”

The 2021 Golden Globes, hosted by Tina Fey and Amy Poehler, will air live on Sunday, Feb. 28 at 5 p.m. PT/8 p.m. ET on NBC. Until then, stay tuned to ETonline.com for complete Golden Globes coverage.