Home » Celebrities » Kanye West Claims He & Vogue Editor 'Apologized To Each Other' After She Called Him Out For 'White Lives Matter' Shirt! 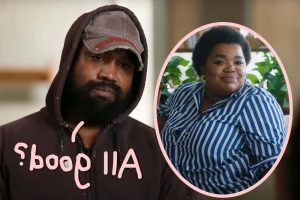 After going on a bullying spree on Instagram, dragging Vogue contributing editor Gabriella Karefa-Johnson for her criticism of his “White Lives Matter” shirt, Kanye West has returned to social media to clear the air.

As we reported, on Monday, the rapper wore the controversial white supremacists’ slogan at his Paris Fashion Week show alongside other models and right-wing talk show host Candace Owens. Gabriella, who attended the Yeezy show, was appalled by the statement piece, calling it “pure violence” on her Instagram Story. And as you can imagine, Ye was NOT a fan of the negative commentary, resulting in his latest online attack. An unfortunate pattern of his these days.

So, after a day of hate, we were honestly pretty surprised to see him return to the app with a more positive update. Apparently, he and Gabriella met up with each other on Tuesday night to discuss their political disagreements. Writing in all-caps, he explained:

“GABBY IS MY SISTER. IM NOT LETTING PEOPLE GO TO BED THINKING I DIDN’T MEET WITH GABRIELLE AT 5 PM TODAY FOR 2 HOURS THEN WE WENT TO DINNER AT FERDIE .”

“ANNA HAD BAZ LUHRMANN FILM OUR MEETING AND WE ARE EDITING TONIGHT. WE TOOK PICS AND I WAS INSTRUCTED TO NOT POST THEM.”

The fashion designer went on to address why he was so upset with the critic, noting it felt like she had been instructed by Vogue to criticize him (a similar claim he’s made about Daily Show host Trevor Noah in the past). Ye wrote:

“IT FELT LIKE SHE WAS BEING USED LIKE TREVOR NOAH AND OTHER BLACK PEOPLE TO SPEAK ON MY EXPRESSION. SHE EXPRESSED THAT HER COMPANY DID NOT INSTRUCT HER TO SPEAK ON MY T SHIRT EXPRESSION. WE APOLOGIZED TO EACH OTHER FOR THE WAY WE MADE EACH OTHER FEEL WE ACTUALLY GOT ALONG AND HAVE BOTH EXPERIENCED THE FIGHT FOR ACCEPTANCE IN A WORLD THAT’S NOT OUR OWN”

But just to be clear, Gabriella may have spoken with Ye, but she definitely didn’t see eye-to-eye with him about his decision to rock the WLM shirt, which he seemed to suggest by adding:

“SHE DISAGREED I DISAGREED WE DISAGREED. AT LEAST WE BOTH LOVE FERDIE AND FASHION.” 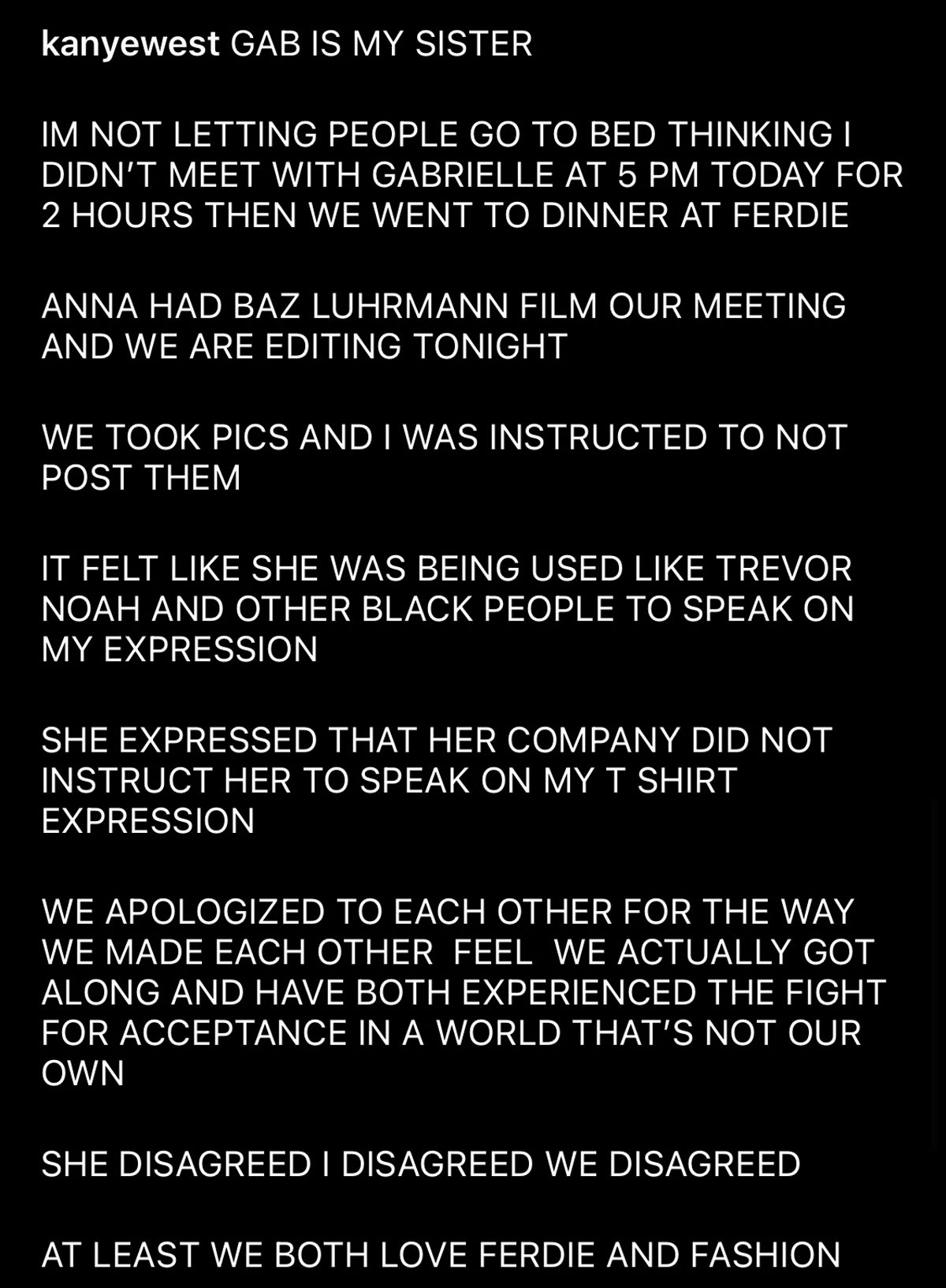 Better than nothing, we guess?

Kanye seems to be the only one who thinks this drama was swept under the rug, though! Also on Tuesday, Vogue took a very public stand against the rapper and in support of their critic while confirming that a meeting did occur. In a text-only social media post, the mag wrote:

“Vogue stands with Gabriella Karefa-Johnson, our global fashion editor at large and longtime contributor. She was personally targeted and bullied. It is unacceptable. Now more than ever, voices like hers are needed and in a private meeting with Ye today she once again spoke her truth in a way she felt best, on her terms.”

It’s great to see the company support their editor — and call out Kanye’s actions for what they were: hateful, harmful, and unacceptable. If only he truly comprehended that. Sigh.

Thankfully, it sounds like Gabriella is doing okay after this whirlwind start to her week. She took to her Instagram Story to thank fans and friends for their support, including Gigi Hadid, writing:

“Your girl has been through it! I’m exhausted, but I am so moved by and grateful for the outpouring of love I’ve received (here and elsewhere) over the last 24 hours. I feel so blessed to belong to a community that would show up for me like this. One thing about me: I will always speak my mind, and always try to honor my truth. My thoughts are my own, and I stand by them.” 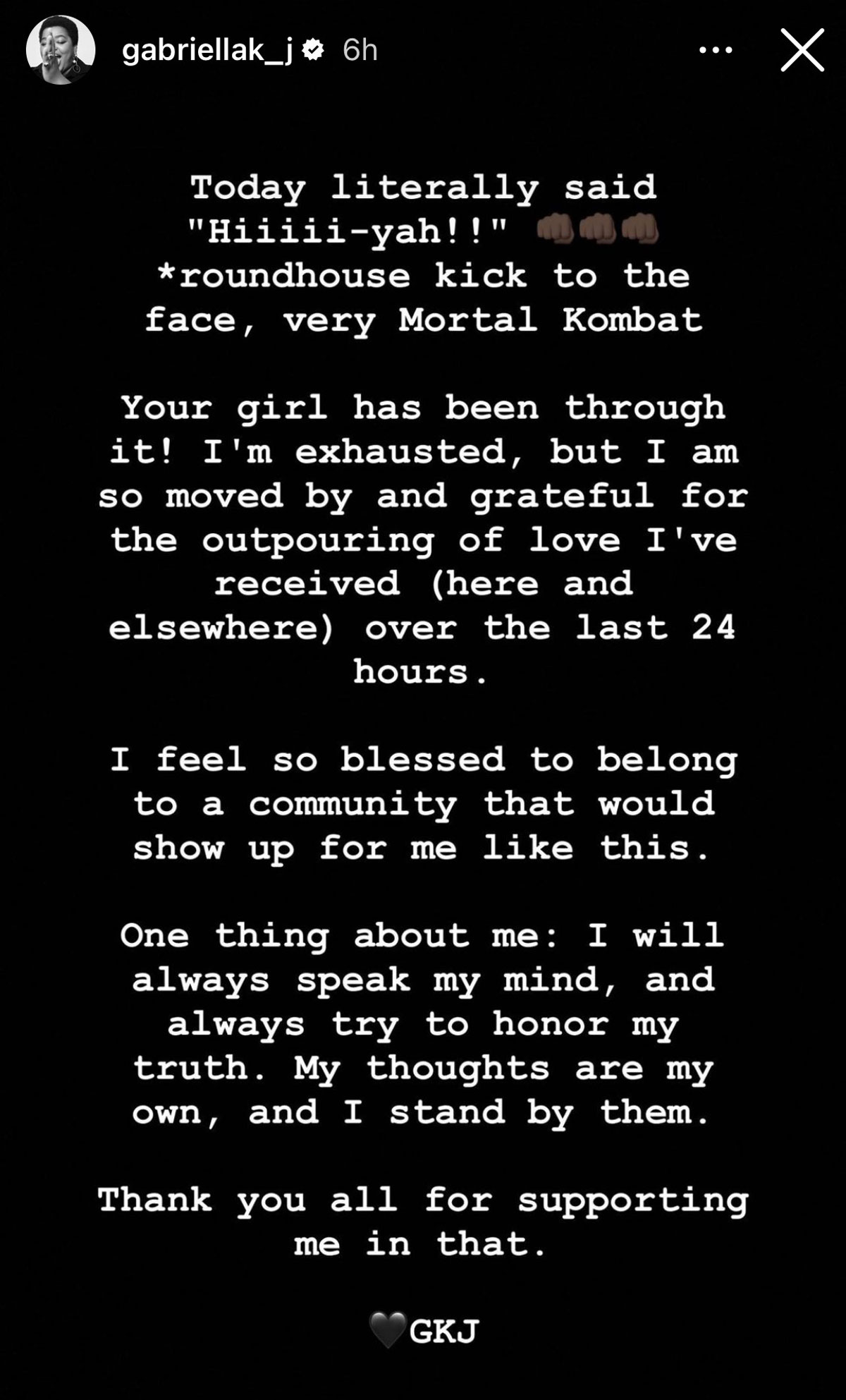 Don’t apologize! She was right to call out Ye for his disappointing design, and he should have seen some criticism coming, too! At least this conversation has seemingly helped Kanye move on from attacking her. Reactions, Perezcious readers?! Let us know (below)! 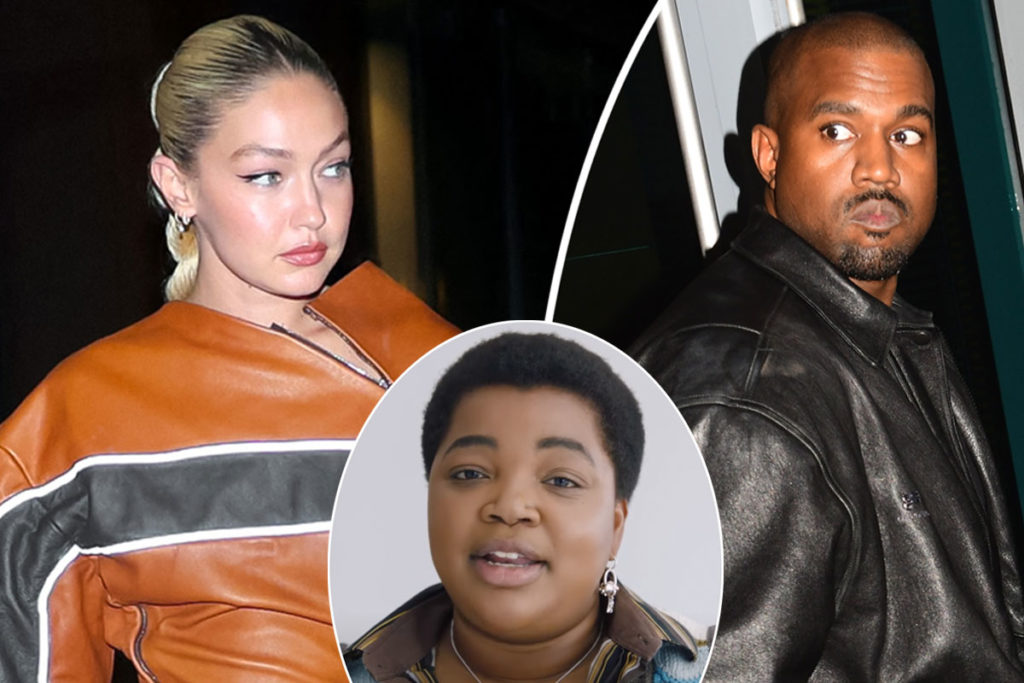 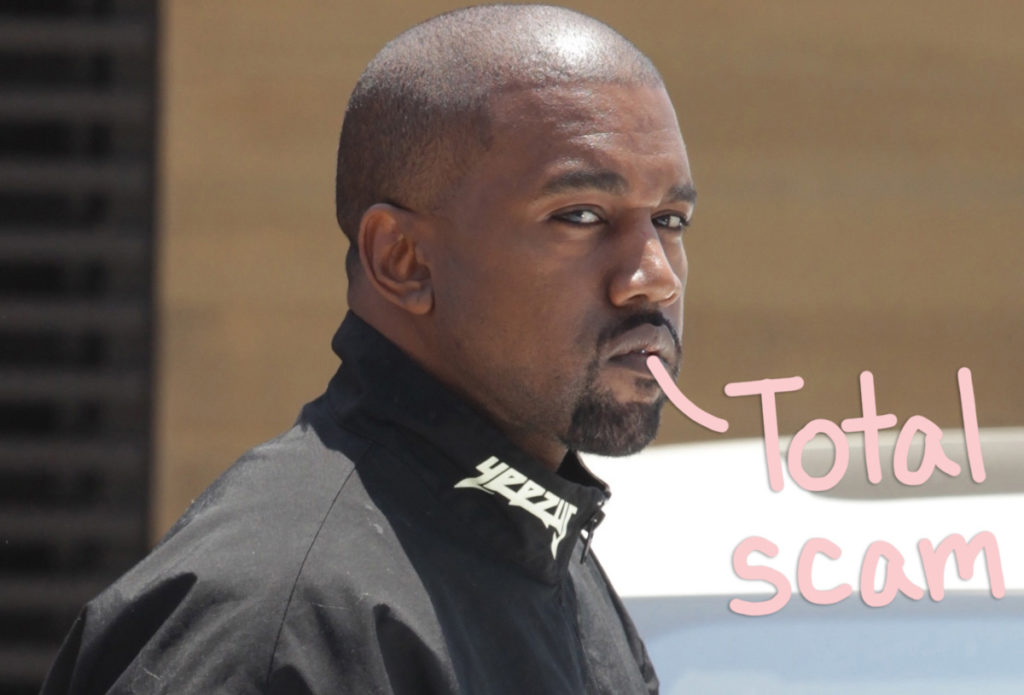 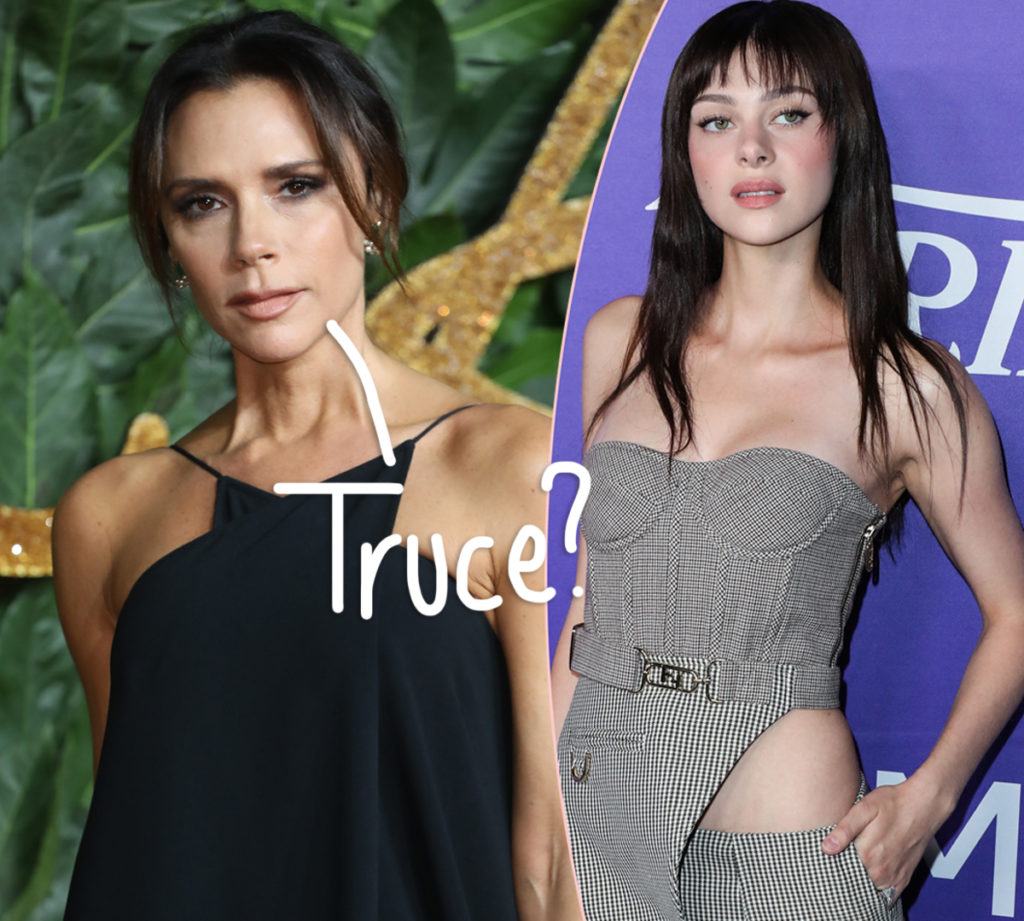 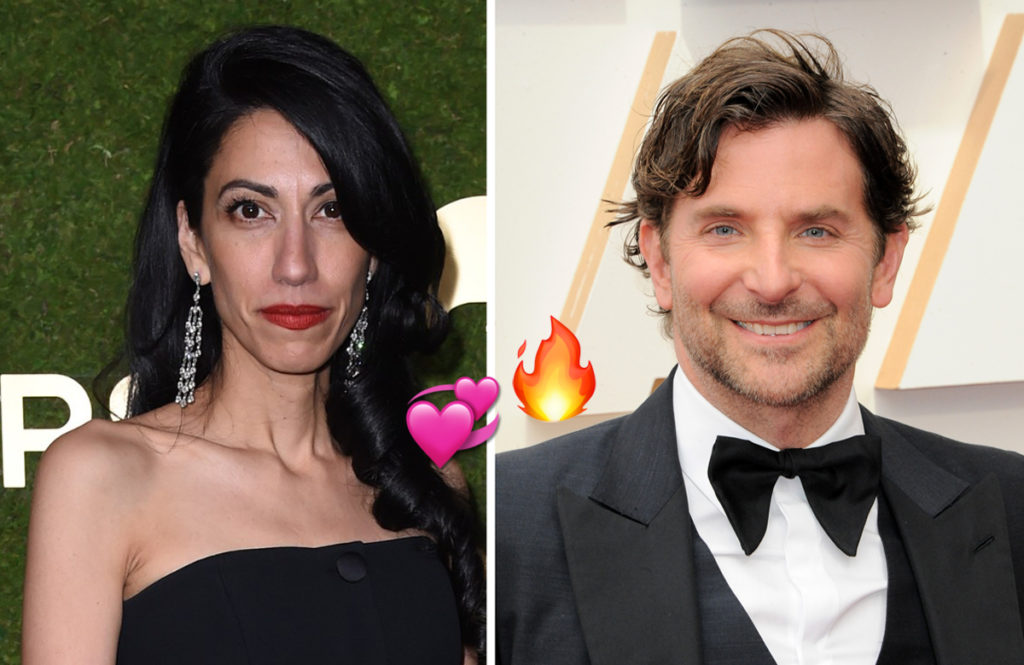