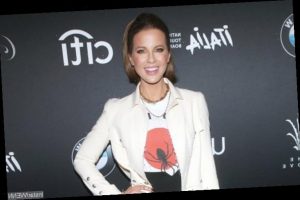 Weeks after coming forward about losing a baby 20 weeks into a pregnancy, the ‘Underworld’ beauty is unveiled to have been appointed as the ambassador for The Mariposa Trust.

AceShowbiz -Actress Kate Beckinsale has been unveiled as the ambassador for a baby loss charity after publicly revealing she suffered a miscarriage years ago.

The “Underworld” star opened up about the “soul destroying” period she went through after losing a baby 20 weeks into a pregnancy in a recent heartfelt Instagram post supporting Chrissy Teigen following the model’s tragedy, and now Kate has been appointed a role for baby loss and grief support charity The Mariposa Trust.

She will join other British celebrities, who are trying to raise the organisation’s awareness. The announcement of her new role coincides with Baby Loss Awareness Week.

“We are honoured that Kate has chosen to become part of our charity family and work with us to raise awareness of this subject,” Mariposa Trust founder and CEO Zoe Clark-Coates said in a statement.

In her Instagram message of support to Teigen, posted on 2 October, Beckinsale wrote, “I’ve noticed people criticizing @chrissyteigen for sharing deeply intimate photos of the loss of her baby. As if there’s some protocol during soul-scouring calamity that, if not observed, emboldens people who do not know her or her family to say how she should be handling the unimaginable.”

“Years ago, I lost a baby at 20 weeks. I had managed to keep my pregnancy quiet and I absolutely collapsed inside and no one would have known. There is grief, shame and shock so often that come with an experience like this, plus the heartbreak of your body continuing, after the loss, to act as if it had a child to nurture. Your milk comes in, with no one to feed. It can be the loneliest, most soul destroying period of time.”

Beckinsale didn’t reveal exactly when the heartbreak happened, but she shares daughter Lily Mo, 21, with her ex-boyfriend, actor Michael Sheen.

She was also married to director Len Wiseman from 2004 until their divorce in 2019.

END_OF_DOCUMENT_TOKEN_TO_BE_REPLACED

END_OF_DOCUMENT_TOKEN_TO_BE_REPLACED
We and our partners use cookies on this site to improve our service, perform analytics, personalize advertising, measure advertising performance, and remember website preferences.Ok