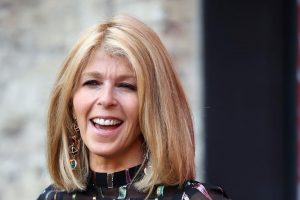 Kate Garraway has shared the rather unique way she and husband Derek Draper spent their anniversary this year.

The Good Morning Britain star, 54, celebrated her 16 year anniversary with Derek on 10 September.

It's been a tumultuous year for the couple, following Derek's battle with Covid.

Mum-of-two Kate picked up the gong for Finding Derek in the best Authored Documentary category at London’s O2 Arena, and she was overwhelmed with the enormity of the support she received when accepting it on-stage.

Finding Derek followed Kate and children Darcey, 15 and Billy, 12, as they coped with her husband Derek Draper, 53, falling ill with Covid-19 last March and the lengthy recovery the family have been through this past year.

Kate revealed that her life has changed since her husband contracted COVID-19 last March, and her new role at home is to be his "24 hour carer".

Discussing what the award meant to her, she told us: "People were so lovely, so lovely it has been really, really nice. On the night, even when we were coming in, so many people were saying oh gosh how it [documentary] helped them so really lovely.

"There were extraordinary documentaries in the category, really, really beautiful documentaries all of which telling lots of really important stories about lots of issues but I think maybe because Covid is the thing that has touched everything and affected everything."

Kate, who is set to present a new BBC health series, managed to call Derek to tell him the news about the NTA win.

She spoke on the ITV breakfast show about her emotional call to her husband Derek to tell him the “bittersweet” news that the documentary won.

Kate had a video call with Derek after her win from the hotel room she stayed in to be near the GMB studio for her early morning role on the breakfast show.

She shared how the couple’s daughter Darcey woke her dad up and he was a bit “bewildered” when Kate called but he was “so happy” and was “very happy that [Kate] was happy”.

She told viewers of GMB: “I think the reason why it perhaps did do well is because everyone’s had a slice…everyone’s had a Derek in their life, or a Darcey, or has lost someone…”

She continued: “Hopefully this is for everybody that has been going through the pandemic.”