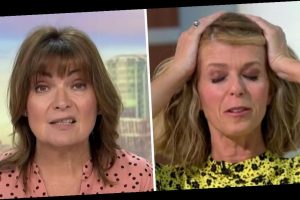 Kate Garraway has been “coping with unimaginable pain” as he husband Derek Draper remains in hospital after contracting the coronavirus, which he has now beaten.

The Good Morning Britain star, who returned to the GMB studio earlier this week, has been praised by Lorraine Kelly for her strength throughout the heartbreaking ordeal.

Kate’s husband Derek remains in a “minimum state of consciousness” in hospital after being admitted with covid 19 in April.

Despite her husband’s health, Kate had bravely made her return to TV, which she said is what her husband would want her to do.

As she appeared alongside Piers Morgan and Susanna Reid on GMB earlier this week, Kate explained: “Derek would not just be saying: 'Why don’t you come back?' He would be saying: 'Why didn’t you do this before?'”

Lorraine Kelly, who hosts Lorraine which airs after GMB on ITV, has now praised Kate after her TV return, where she is filling in for Piers and Susanna with co-host Ben Shepherd.

Writing in her column for The Sun Online, Lorraine said: “On Monday, my friend and ­colleague Kate Garraway returns to work on GMB after almost four months away from our screens.

“During that time she has been coping with the unimaginable pain and distress of her husband Derek battling for his life after contracting Covid-19.”

Lorraine, who recently revealed fears for her sick dad, continued: “Kate has never once complained or asked: ‘Why me?’

“She has simply ­soldiered on, reassuring and raising her children, praising the NHS and helping others in the same boat.

“At times it has been a lonely, ­miserable, tough voyage through uncharted waters. But Kate steered a stoic and steady course throughout.”

She added: “The woman you saw in the TV jungle (and doesn’t that feel like several ­lifetimes ago?) won the hearts of the nation by being kind, funny and authentic.

“This was supposed to have been her time in the sun. Instead, she has been going through hell.

“Her hopes have been raised and dashed but throughout it all, Kate has never given up on Derek.

“While he is still breathing, she keeps focused on the day he will be back at home where he belongs.”

Earlier this week, Kate said it was a “miracle” her husband was still alive.

She emotionally said: “It is a very desperate situation. It’s very, very difficult and of course there’s fantastic hope that she’s still alive.

“The doctors do keep saying, it is a miracle he is still alive. I was speaking to somebody yesterday, a doctor that has treated him in two of the hospitals he has been in and said: ‘He is sick as anyone I’ve ever seen in 35 years of medicine never mind covid. And some of the people that are as sick as him aren’t here'.”