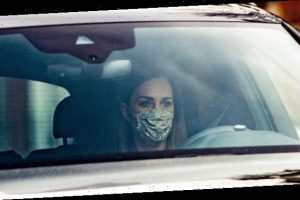 Kate Middleton was spotted driving back to Kensington Palace following the intense interview in which her sister-in-law, Meghan Markle, claimed that Kate made her cry before her wedding.

Kate Middleton was seen masked up and in her car on March 8 following the explosive interview featuring her sister-in-law, Meghan Markle, sharing shocking revelations with Oprah Winfrey about her experience in the Royal Family. The Duchess of Cambridge, 39, was seen with her eldest son, Prince George, 7, driving to her abode at Kensington Palace. Kate wore a floral face mask and looked vigilant, ensuring that she drove safely while photographers snapped photos.

The new image of Kate comes less than one day after the March 7 interview between Oprah, The Duchess of Sussex, 39, and Meghan’s husband Prince Harry aired on CBS. Among the shocking claims that Meghan shared with Oprah, one involved her equally famous sister-in-law, who is married to Prince Harry’s brother, Prince William. Meghan claimed that, in the days leading up to her May 2018 royal wedding, Kate made Meghan cry.

“The narrative with Kate, which didn’t happen, was really, really difficult and something, I think, that’s when everything changed, really,” Meghan told the famed media mogul and journalist, referencing tabloid stories that surfaced roughly six months after Meghan and Prince Harry’s wedding alleging that Meghan was the one who made Kate cry. “No [I did not make Kate cry]…The reverse happened,” Meghan claimed.

Meghan never shared what it was that Kate said to her that brought her to tears, but she did confirm more details about what the disagreement may have been about. “A few days before the wedding she was upset about something – the issue was correct about flower girl dresses – and it made me cry. It really hurt my feelings,” Meghan said. Meghan also revealed why she was sharing her side of the story.

“I don’t say that to be disparaging to anyone, because it was a really hard week of the wedding and she was upset about something. But she owned it and she apologized and she brought me flowers and a note apologizing, which is what I would do if I knew that I hurt someone…just take accountability for it,” Meghan continued to explain. “What was shocking was…six or seven months after our wedding that the reverse of that would be out in the world. I would’ve never wanted that to come out about her, ever, even though it had happened. I protected that from ever being out in the world.”

Along with the claims about the incident involving Kate and Meghan, the Duchess of Sussex and her husband shared more bombshells about their experience navigating the Royal Family. Meghan confessed that her mental health was suffering greatly to the point of suicidal thoughts, and claimed that the Royal Family didn’t support her or Harry when Meghan advocated for herself to seek out treatment. But between the shocking revelations, there was also happy news. Meghan and Prince Harry announced that their second child would be born later this summer, and that they are having a baby girl!