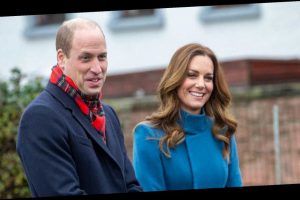 Like much of the world, the U.K. is under a travel restriction to curb the spread of COVID-19. Officially, the government is requesting that everyone "avoid travel in the U.K. or overseas." Of course, there are exceptions for work, education, and other reasons — and it looks like Prince William and Kate Middleton's train tour is falling under one of those reasons, since they're crisscrossing the country to thank essential workers and volunteers.

And while royal fans are loving the positivity (and the coats), not everyone is supporting the move. Several government officials are calling out the Cambridges for sending mixed messages, urging much of the population to stay home while they travel. Vaughan Gething, Wales's Health Minister, told USA Today, "I'd rather no one was having unnecessary visits. And people always have divisive views about the monarchy, but their visit isn't an excuse for people to say that they are confused about what they are being asked to do."

Nicola Sturgeon, Scottish First Minister, echoed Gething, telling The Sun, "The Scottish Government was advised about the intention to visit, and we made sure that the Royal Household were aware, as you would expect, of the restrictions in place in Scotland so that could inform both the decision and the planning of the visit. The Royal visit is a matter for the Royal household and the arrangements around it, and any questions about those arrangements, should be directed to the Royal household."

Newsweek adds that aside from public health reasons, critics are calling out the trip for it's "obscene" cost to taxpayers. Last year, a similar trip utilizing the Royal Train cost around $30,000.

Graham Smith, chief executive of Republic, an anti-monarchy campaign group, told Newsweek: "Why are they taking the train? It's just a slightly ridiculous mode of transport to have their own train in the first place. They could have gone up by car or taken a scheduled train which would have cost a fraction of that."

William and Kate made a stop in Edinburgh, Scotland, before making an appearance in Cardiff, Wales. In total, they'll travel 1,250 miles on the trip.

END_OF_DOCUMENT_TOKEN_TO_BE_REPLACED

END_OF_DOCUMENT_TOKEN_TO_BE_REPLACED
We and our partners use cookies on this site to improve our service, perform analytics, personalize advertising, measure advertising performance, and remember website preferences.Ok