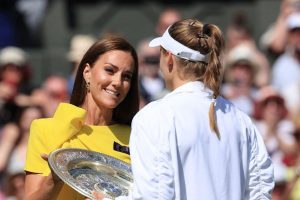 Kate Middleton was seen beaming with joy on Saturday as she presented Elena Rybakina with her first Wimbledon trophy after the 23 year old beat Ons Jabeur to claim victory in the women’s finals.

A vision in yellow, the Duchess of Cambridge could be seen smiling warmly as she congratulated Elena on her hard fought victory against her Tunisian competitor.

Dressed in a stunning Roksanda dress that featured a bow shoulder detail and pleated accents, the Duchess attended today’s match alone after appearing earlier in the week alongside her husband William, as British number one Cameron Norrie scored a quarter-final victory on Tuesday.

During the presentation of the trophy, Kate could be seen smiling warmly as she engaged in a small chat with Elena and congratulated her on her game, something that further added to the player’s own joy as she happily accepted both the royal praise and her trophy.

Kate first began taking participating in the trophy ceremonies back in 2019, as she slowly took over the duties from Prince Edward, who had previously conducted the ceremony up until he stepped down as the President of the AELTC.

Today’s victory marked the Khazak player’s first in a Grand Slam title, as up until now she had never made it beyond the quarter finals.

Her success however has been steadily building in recent months, with Elena making it all the way to the semi-finals of the Tokyo 2020 Olympics before losing out in a bronze medal match to Elina Svitolina.

Thankfully her first Wimbledon final appearance ended in a much happier circumstance, with the young player hoping to continue her success at the US Open which gets underway next month.

Alongside an audience that included the Duchess, a number of other famous faces joined Kate for the match, including Hollywood icons Tom Cruise, Dame Maggie Smith and Jodie Comer.

Much like Kate they all appeared to be thoroughly engrossed in the match as they watched Elena play her way to victory and scoop the long awaited title.

A keen tennis fan since childhood, Kate currently serves a patron of the All England Lawn Tennis and Croquet Club and is a familiar face to many Wimbledon fans as she attends the annual event year on year.

Keeping up with her tradition of rewearing some of her most iconic pieces, the dress that Kate wore for today’s appearance was pulled from her wardrobe less than a year after she was last seen wearing it.

The canary yellow midi dress was worn during the Cambridge’s royal tour of the Caribbean back in March, and marks the third time that the duchess has worn the stunning colour to a Wimbledon match.