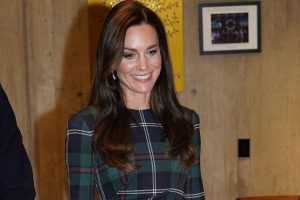 The Princess of Wales, Kate Middleton, and her husband Prince William braved the Boston rain to celebrate the launch of his Earthshot Prize.

Kate wore a mid-length green, tartan, Burberry dress, costing £890, and green heels from Emmy London, £495, which she paired with a matching forest green Mulberry bag which retails for £850.

Before heading in, Kate braced for the Boston downpour outside with a bespoke mid-length dark green Alexander McQueen coat.

The 40 year old Princess completed the look with a pair of £72 pearl earrings from Shyla, a jewellery brand which says it focuses on being “ethically motivated,” and prides itself on its sustainable packaging.

The outfit was very much in keeping with the evening’s theme which was “green-living”, a nod to the award’s focus on battling the climate crisis, and Kate’s outfit was especially impeccable considering the couple’s short turn-around. It’s thought the pair landed in the US just an hour before on a public British Airways flight and Kate no doubt had to rush to change out of the navy blue, £1890, Alexander McQueen suit she completed the journey in.

The Prince and Princess of Wales were welcomed to the event at Boston’s City Hall by the city’s Mayor Michelle Wu and her two sons.

At the launch, the Prince and Princess of Wales officially kick-started this year’s Earthshot prize proceedings by hitting a button that lit up 16 of Boston’s most iconic landmarks with a bright green glow.

Prince William founded the Earthshot prize in 2020 with the aim of finding and harnessing the world’s best and brightest to help tackle climate change. Each year, the Award gives its five winners a grant of one million pounds to spend towards further environmental research.

Presently the Award is scheduled to run until 2030 and it’s not clear if the grants will continue after this stage.

The couple’s trip to Boston marks their first visit to the US in eight years and only their third since being married. Kate and William first headed stateside on a whirlwind California tour just a few months after their 2011 nuptials and, three years later, made a whistle stop visit to New York.

Despite William’s brother, Prince Harry, relocating to California in 2020 it’s not thought that the Prince and Princess of Wales will be stopping by to make a visit this time around.

Instead, it’s thought that the two will spend just a few days in the US before heading back to London.