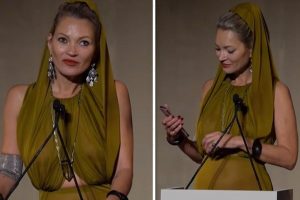 Kate Moss, 48, appeared at a Wall Street Journal event to present her friend Anthony Vaccarello, 40, with the award for Innovator of the Year. The supermodel appeared to have a tough time at the podium as she used her phone as a prompt seconds after starting her speech.

The Wall Street Journal event was a star-studded evening, filled with designers, supermodels and celebrities alike.

WSJ posted a clip of Kate Moss presenting the award to the YSL creative director on their Instagram.

Although she has strutted runways across the globe, Kate was visibly shaky and nervous as she started her speech.

She just managed to get out “good evening ladies and gentlemen” before using her phone as a prompt.

The model fumbled with the microphone and glanced at her phone before continuing.

In a slow speech, Kate said: “Anthony and I have worked together for… years.

“Since he started at Saint Laurent… I could recognise his instinct for fashion and … I wanted to be part of that.

“I am honoured to be part of his Saint Laurent family and to be his friend.

“Ladies and gentlemen I am honoured to present Anthony Vaccarello with the … Innovator of the Year award.”

The model quietly whispered the name of the award before quickly stepping away from the microphone.

However, the runway for the event had an entirely different outcome for Kate.

She left little to the imagination in a sheer olive green dress, with even her hip tattoos visible through the thin material.

At the start of her career, the top model went from being a rising star in the fashion industry to an international sensation almost overnight.

She was originally discovered while catching a flight at JFK airport and became the face of Calvin Klein by the age of 18.

Having been in the spotlight for three decades, the model is notoriously private but as a world-renowned figure, little details have often slipped into the public radar.

One such detail was her partying days during the 1990s and becoming the poster-girl for the infamous heroin chic trend.

The model even reportedly got the nickname The Tank for her ability to “put [alcohol] away so hard and fast” according to Maureen Callahan’s 2014 book Champagne Supernovas.

However, in recent years the model has left her partying days behind her.