Home » Celebrities » Katherine Ryan reports neighbours for balcony overlooking her pool: ‘They have to take it down’

Katherine Ryan reports neighbours for balcony overlooking her pool: ‘They have to take it down’ 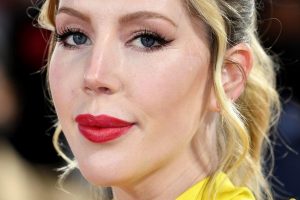 Comedian Katherine Ryan has reported her neighbours who have built a balcony overlooking her pool at her property in London.

The 38 year old, who stars in Channel 4’s comedy show 8 Out of 10 Cats, is not happy about the new balcony, complaining that builders leaning over the balcony, and smoking, can see her 12 year old daughter in the pool.

Katherine, who studied city planning at university in Toronto, told MailOnline: "Due to my background in urban planning, I was able to report them,

“I'm not a snitch, but their prejudicing of my property actually devalues my property.”

She added: "I have 12-year-old girls in the swimming pool and then a bunch of builders like leaning over that balcony smoking."

Speaking about how she almost felt bad about it, the comedian said:"I rang the council. I feel bad about it, but then I convinced myself not to. They have to take it down.”

Katherine lives with her civil partner – and childhood sweetheart – Bobby Kootstra, their ten-month-old son Frederick, and her daughter Violet, 12, from a previous relationship.

She often posts snaps of her pool and garden at her North London home. Katherine has previously spoken of how her childhood boyfriend walked back into her life and changed her views on marriage.

She said: “Magically my high school boyfriend walked into my life and I did everything possible not to marry him.

She continued: “I really was against partnership at that point. I was looking forward to ageing alone with many dogs. And then I just loved him too much.”

In an exclusive interview with OK! , the comedian said: "By the time Fred joined our family I felt very lucky because we had lost two pregnancies before him.

"But I also have been pregnant for 18 months so I joke that I had the gestation of an elephant. It just felt relentless to me.”

She continued: "I think any time you reflect on a difficult time you see the purpose in it.

"I think it was actually kind of humbling and very centring to have to wait for Fred and, in a way, I’m glad that he was born at the end of lockdown, not the beginning.

As well as appearing on 8 Out of 10 Cats, Katherine can be seen on television panel shows such as QI, Mock the Week, Have I Got News for You and comedy roast show, Safeword.

For the latest updates on your favourite celebs, sign up to OK!'s daily celebrity newsletter.