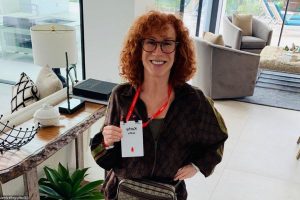 The former ‘Suddenly Susan’ star reveals that she is now lung cancer free though she is still suffering vocal cord issues that make her speak in a much higher note than usual.

AceShowbiz –Kathy Griffin has given her fans a major health update. When making a TV appearance, the comedienne excitedly announced that she is now cancer-free after undergoing surgery to remove half of her left lung as part of her cancer battle.

“I’m cancer-free,” the former “Suddenly Susan” star revealed in the Monday, November 29 episode of “Jimmy Kimmel Live!“. She said, “I don’t know why, I had a tumor, right? And I’ve never smoked, and it was in there for 10 years. So get this, they took it out and found it in another scan.”

Kathy went on to share that her doctor tried to make light of the procedure with a few jokes of his own as he knew that she’s a comic. “So I go in, and he’s like describing how they take half your lung out, and he goes, ‘It’s kind of a like a balloon,’ ” she told Jimmy Kimmel.

“So, we do it laparoscopically and we poke it, then he goes, ‘And when we take it out, kind of looks like a used condom,’ ” Kathy further explained. She added, “And then he goes, ‘You can use that. And I just did. And insurance covered it.”

During the interview, Kathy could be heard speaking in a much higher tone than usual. The 60-year-old actress shared that she suffered vocal cord issues that are still lingering. However, she noted that it’s not “permanent” and it’s slowly getting better over time.

“It will heal, but I’m sort of enjoying it,” Kathy confessed. “I’m a good two octaves higher, I think.” Jimmy then asked her, “Is it two octaves, really?” prompting her to add a joke, “It might be. It’s higher than Mariah Carey, I know that.”

Kathy first revealed that she was battling stage 1 lung cancer in August. “I’m still a little bit in shock. Not denial, but once a day I’ll turn to nobody next to me and go, ‘Can you believe this s**t?’ ” she said at the time.

After having half of her left lung removed, a spokesperson for Kathy revealed the procedure “went well and as planned.” The rep added, “Kathy is now in recovery and resting. Doctors say the procedure was normal without any surprises.”

Then in September, Kathy herself admitted that she’s struggling with her breathing and a cough. “One thing that sucks about cancer, it’s hard to focus on anything else when one is experiencing shortness of breath, deep coughing, pain, extreme fatigue & in my case, vocal chord issues,” she tweeted.