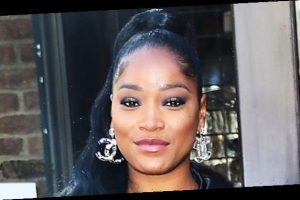 Keke Palmer, Madison Beer, Paris Jackson and many more stars have taken to the streets to protest for justice after the tragic death of George Floyd, and they’ve posted moving photos and videos of their experiences.

Since the May 25 death of George Floyd, a number of celebs have stepped up and used their platform to stand in solidarity with the Black Lives Matter movement and protest police brutality and racial injustice. Many stars have joined fellow protestors in the streets, carrying signs and documenting their time with incredible activists. Here are the celebs who have been out protesting.

On June 2, Hustlers actress Keke Palmer was not only seen protesting in Los Angeles, but having an open dialogue with members of the National Guard. She entreated the men in uniform, carrying weapons, to join her and fellow protestors in their march. “We need you. March beside us. March beside us. Let the revolution be televised. We’ll start marching and you march with us. Please,” she pleaded with the men. Hesitant to leave their posts, the men did not march with Keke and protestors but they did take a knee with them.

Shawn Mendes, 21, and Camila Cabello, 22, joined protestors in Miami, Florida on Sunday, May 31. The couple were both seen holding home made cardboard signs as they braved the crowds with protective black face masks in videos captured by fans also protesting. The couple have been quarantined with Camila’s parents in the area since March.

Madison Beer, 21, has tweeted that she was tear gassed at protests in Santa Monica, California. “LEAVE SANTA MONICA NOW IF YOU CAN I WAS JUST TEAR GASSED THEY ARE ARRESTING EVERYONE AND TEAR GASSING ALL CROWDS,” she posted on the social media platform. “If you’re in Santa Monica, please leave now. They’re tear gassing everything everywhere. I was just tear gassed and I can’t breathe,” she said in an Instagram live video. Earlier in the day, the star shared that she was looking for a “peaceful” protest to attend. “just trying to find a good one to go to, if anyone hears of another peaceful protest in LA today let me know,” she tweeted just hours before.

today started out so beautifully, seeing people come together with peace and harmony in their hearts. it broke my heart to see it all go up in flames. violence is not the answer. how do we expect to bring our world up to a happier and higher and healthier way of living if we’re stooping as low as those that committed the crimes we’re protesting ? peaceful protest only!!

Paris joined a protest by walking and holding a sign that read, “PEACE, LOVE, JUSTICE,” along with a heart drawn on it and she shared a photo of her posing alongside someone else holding a sign that read, “INDIGENOUS PEOPLE FOR BLACK LIVES.” She also posted a video of people peacefully drumming and dancing with the signs. “today started out so beautifully, seeing people come together with peace and harmony in their hearts,” she wrote in the caption for the post before admitting the violence that happened later “broke my heart.”

Emily shared several pics and videos that showed the peaceful and violent part of the protests, including one pic of her walking and holding a sign that read, “DISMANTLE POWER STRUCTURES OF OPPRESSION” and a video that showed a car on fire. She also shared a photo of a wall that had “Arrest Killer Cops” written on it in graffiti. Another showed several protesters sitting on the ground.

Ariana Grande also joined in the same protest. She walked and held a “Black Lives Matter” sign while also stopping to take photos with fans. She shared videos of her walking on the streets with honking cars signaling their support. Machine Gun Kelly was another star at the L.A. protest and he shared a black and white photo of himself holding a sign that read “Silence is betrayal” while standing near Mod Sun.

John Cusack also spoke out about being involved in a protest in Chicago, IL and even claimed cops in the area hit his bike with batons after he tried filming video of a burning car. He took to Twitter to share a video that had audio of the incident in which voices, most likely cops, were telling him to “Get out of here!” to which he responded with, “Alright, I’m going.”

Machine Gun Kelly has taken to the streets of Los Angeles and Hollywood for a number of days. He’s stood in solidarity with protestors and on May 30, a photo of the rapper carrying a sign was shared on Instagram. The caption read, “justice soon” and featured a heart emoji and solidarity fists.

Halsey and her ex Yungblud were also spotted at the Los Angeles, CA protest. They walked alongside others while wearing face masks to stay safe from the COVID-19 pandemic and the “Without You” singer took to her Instagram story to share photos and captions that claimed she witnessed cops “open fire with rubber bullets and tear gas multiple times.”

Nick Cannon also shared a photo of himself at a Minneapolis protest holding a black and white poster of George with the words “JUSTICE FOR FLOYD” on it. He wore a black hoodie that had George’s words to cops, “Please I can’t breathe”, written on it in white text. He also shared an image of himself in front of a stop sign, with the caption “Stop Killing Us!”