Home » Celebrities » Kel Mitchell’s Daughter Accuses Him of Being an Absent Dad, Calls Him ‘Fake’

Kel Mitchell’s Daughter Accuses Him of Being an Absent Dad, Calls Him ‘Fake’ 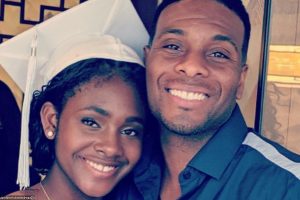 When calling out her actor father on TikTok, Allure Mithcell claims that ‘he only paid for what in my eyes looked good on paper’ instead of being there for her emotionally.

AceShowbiz –Kel Mithcell is another celebrity who got called out publicly by his child. His daughter Allure Mitchell blasted him on TikTok for being a fake and absent dad.

Sharing some photos of her and her father, Allure added a conversation that allegedly happened between the two. In the caption, she wrote, “I guess ten years without your children could do this to you. I am done being silenced. My father is the type of man to fake as if he’s in my life but he’s not. He was there ‘financially.’ “

“What I mean by that is he only paid for what in my eyes looked good on paper. He helped pay for my first car, my high school tuition, and my housing on campus until I cut him off for exactly this,” she added. “I now live completely independently without any parental help I did this to prove to my father that his money was never what I needed, and growing uptake way I had to it boggles me that’d even think that’s what I cared about.”

Allure then alleged that Kel “not once made steps to open up his home to me as a forever home” when she was “homeless.” She said he only got her “a dorm on campus during that time.” Allure continued to claim, “My father refuses to get me medical insurance of any sort out of fear my mother would use it, I don’t live with my mother. And so how my mother would get access to that idk.”

“While you got to live your greatest life for the ten years without out us, building your career and selling the house your ex wife and your children were living in… I had to experience unimaginable degrees of abuse due to this I never really got the chance to be just a child,” she further elaborated. “He never asked me why I wanted to be lawyer but the reason I do is because I had to watch my mom research law to help her keep our house over our head.”

“In the end she lost and we were without a home, still without a home. Yet Kel Mitchell, my father, gets to live in a five bedroom house in the valley. Yet in his eyes I’m ungrateful,” Allure concluded. “I never cared about your money. I busted needed my dad.”