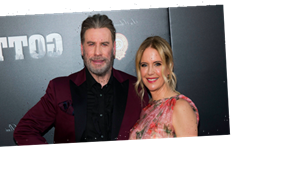 Kelly Preston has died after a battle with cancer. Learn more about the 57-year-old actress & mother who shot to stardom in the ’80s.

Kelly Preston has tragically died after a private battle with breast cancer at just 57 years old. “On the morning of July 12, 2020, Kelly Preston, adored wife and mother, passed away following a two-year battle with breast cancer,” a statement issued to People magazine read. “Choosing to keep her fight private, she had been undergoing medical treatment for some time, supported by her closest family and friends,” the statement also read, describing the star as “a bright, beautiful and loving soul who cared deeply about others and who brought life to everything she touched.” Learn more about the actress who was married to John Travolta, 66, for 28 years.

1. She was married to John Travolta. John and Kelly met back in 1987 while shooting the film The Experts. The married in 1991 in Paris at the luxe Hotel de Crillon after four years of dating. Over their marriage, the couple welcomed three children: their late son Jett, in 1992, daughter Ella, now 20, in 2000, and son Benjamin, now 9, in 2010. Recently, the couple celebrated their 28th wedding anniversary and took to social media to express their love. “To my dearest Johnny, the most wonderful man I know. You have given me hope when I have felt lost, loved me patiently and unconditionally,” Kelly began her sweet tribute.

To my dearest Johnny, the most wonderful man I know. You have given me hope when I have felt lost, loved me patiently and unconditionally… made me laugh harder than any other human being possible… shared the most beautiful highs and at times lows. You’re a dream Daddio and make life so much fun!! I trust my love with you implicitly… with you I know I will always be okay no matter what happens… I love you forever and completely. Happy 28th Anniversary @johntravolta 💕♥️🥰

“Made me laugh harder than any other human being possible… shared the most beautiful highs and at times lows. You’re a dream Daddio and make life so much fun!! I trust my love with you implicitly… with you I know I will always be okay no matter what happens… I love you forever and completely. Happy 28th Anniversary,” she penned on Sept. 5, 2019, including a cute photo of the couple at dinner.

2. She lost a son. Tragedy struck the Travolta family in 2009 when Jett, then just 16, died after a seizure. The incident occurred while the family was vacationing in the Bahamas. Jett had a history of seizures, suffering from Kawasaki disease as an infant, as well as being diagnosed as autistic. Recently, Kelly remembered Jett on what would have been his 28th birthday. “Happy Birthday to our sweetest Jetty, we love you!!” she sweetly captioned a photo of them hugging.

Happy Birthday to our sweetest Jetty, we love you!! 💖✨

3. She shot to fame in the ’80s. Kelly’s starred in 1985 teen comedy Mischief, going onto play the role of Marnie Mason in Ivan Reitman’s Twins alongside Arnold Schwarzenegger and Danny DeVito. A bonafide A-Lister by the ’90s, Kelly starred opposite of Tom Cruise in the 1996 classic Jerry Maguire, which also included co-stars Renee Zellweger, Jerry O’Connell, and Cuba Gooding Jr.

4. She was from Hawaii. Kelly was born Kelly Kamalelehua Smith on October 13, 1962 in Honolulu, Hawaii. After the death of her father when she was just three years old, Kelly moved to several places with her mother and stepdad, including Iraq and Australia. She later returned to Hawaii to attend college prep school Punahou School in Honolulu, going on to pursue drama at the University of Southern California.

5. She was a Scientologist. Kelly and John are both public members of the Church of Scientology, and were even married by a French Scientology minister back in 1991. Kelly opened up about how Scientology has helped her in a 2012 interview with talk show host Amanda de Cadenet. “In Scientology, we have what’s called ‘auditing,’ and that helps you to address things in your life and to strip them away,” Kelly said on The Conversation at the time. “It’s a path of spiritual enlightenment. Also, it helps rid the mind of painful experience completely. Through that, the people at my church literally held my hand and got me through … I will forever be indebted,” Kelly also said.

END_OF_DOCUMENT_TOKEN_TO_BE_REPLACED

END_OF_DOCUMENT_TOKEN_TO_BE_REPLACED
We and our partners use cookies on this site to improve our service, perform analytics, personalize advertising, measure advertising performance, and remember website preferences.Ok