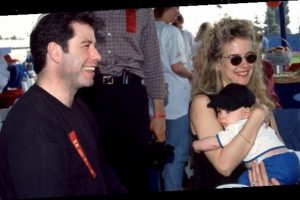 Kelly Preston passed away on June 12 after a private two-year battle with breast cancer. She was supported through her fight by her family and friends.

“Choosing to keep her fight private, she had been undergoing medical treatment for some time, supported by her closest family and friends,” the statement also read, describing the star as “a bright, beautiful and loving soul who cared deeply about others and who brought life to everything she touched.” Her rep added, “Her family asks for your understanding of their need for privacy at this time.”

Kelly married John on Sept. 12, 1991, and the couple had three children together: the late Jett, who passed at just 16 in 2009 after a seizure, their daughter Ella, now 20, and son Benjamin, 9. The couple recently took to social media to celebrate their 28th wedding anniversary, with John sharing a beautiful tribute for his wife. “Happy Anniversary to my wonderful wife @therealkellypreston,” John gushed, while Kelly praised him as “the most wonderful man I know. You have given me hope when I have felt lost, loved me patiently and unconditionally… made me laugh harder than any other human being possible… shared the most beautiful highs and at times low…. I love you forever and completely. Happy 28th Anniversary @johntravolta.”

To my dearest Johnny, the most wonderful man I know. You have given me hope when I have felt lost, loved me patiently and unconditionally… made me laugh harder than any other human being possible… shared the most beautiful highs and at times lows. You’re a dream Daddio and make life so much fun!! I trust my love with you implicitly… with you I know I will always be okay no matter what happens… I love you forever and completely. Happy 28th Anniversary @johntravolta 💕♥️🥰

Originally from Hawaii, she pursued acting as an undergraduate student at the University of Southern California, going on to land her first big acting role in 1985’s Mischief. Notably, she later starred alongside Tom Cruise in 1996’s Jerry Maguire, and appeared in movies like For Love of the Game and Twins. She most recently played the role of Victoria Gotti in Gotti, marking her final film.