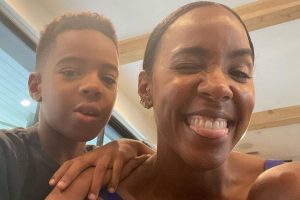 In a chat with Jennifer Hudson, the ‘Dilemma’ singer opens up about her ‘bad parenting moment’ which led Beyonce Knowles’ mother Tina Knowles to reprimand her.

AceShowbiz –Kelly Rowland was rebuked by Tina Knowles over her parenting decisions. The 41-year-old pop star – who has Titan, seven, and 21-month old Noah with her husband Tim Weatherspoon – was scolded by her former Destiny’s Child bandmate Beyonce’s mum Tina over a “bad parenting moment” when she took her eldest to see her new horror film “The Curse of Bridge Hollow“.

“I had a real bad parenting moment. I thought since I’m sitting right there with them we were fine. But there’s a scene in a movie where mommy looks like she’s about to go to the other side and basically Titan goes ‘Mommy!’ Like it was a whole release,” she said.

“He cried for five minutes! He was like ‘Mommy!’ was like ‘Yo, I’m right here, I’m right here. I’m not going nowhere,’ and he was like, ‘No.’ It was a whole moment. So I called my Mama T, and she’s like ‘Well, why the hell you do something like that?’ She didn’t understand why I even shot a movie. She’s like, ‘It’s Halloween, baby, you don’t do that no more!’ “

The “Bootylicious” hitmaker stars alongside Marlon Wayans in the movie which sees a small town taken over by Halloween decorations come to life and she explained that there was “more to it” than just a haunted town.

Speaking on “The Jennifer Hudson Show“, she added, “So basically this new family move to a new town and the town is haunted. That’s all I’ll say but there’s ore to it. It’s really really cool!”

The “Dilemma” hitmaker previously spoke of how overwhelmed with love she felt when her bandmates met her son for the first time. She said, “The girls were literally over here at the house just recently and when they met the baby, it was like another part of my heart just … being able to share space with Michelle and Bey is truly a gift.”