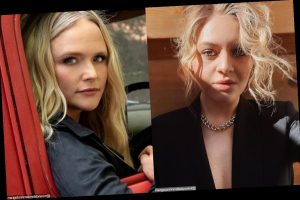 During an appearance on ‘The Kelly Clarkson Show’, the ‘Unapologetically’ hitmaker shares the embarrassing incident she had in front of her idol at the 2020 Country Music Awards.

AceShowbiz -Country star Kelsea Ballerini is still trying to be Miranda Lambert‘s friend after her first attempt to become pals ended in a bloody mess.

The young singer/songwriter is a massive fan of the “Over You” icon and was thrilled about getting the chance to meet her in person last year (20), amid the coronavirus crisis, at the Country Music Awards.

“I do not know Miranda Lambert very well… so I still get really nervous around her, because I just want to be her friend,” the “Unapologetically” hitmaker tells “The Kelly Clarkson Show“, recalling an embarrassing moment when she found herself talking to her idol and her manager, while drinking from “those really expensive wine glasses that are like, paper thin.”

“It (glass) shattered in my mouth, cut my lip, and I had to, like, spit out bloody glass and run to the bathroom in front of her (Miranda),” she adds. “I think everyone was like, ‘Did she just eat glass? Is that a thing she does…?’ “

“I had to go to the bathroom, stop my lip bleeding, and I was like, ‘Well I can’t leave now or they’ll think I’m really weird and I care way too much what people think of me.’ So I had to go back to the party, hold my lip so it stops bleeding, and try to act normal around Miranda Lambert.”

And worst of all, she still feels as if she hasn’t met her idol properly.

“We still don’t know each other,” she laughs.