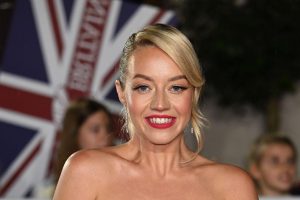 The man that Kelsey Parker has reportedly moved on with following the death of her husband Tom Parker was jailed in 2013 for killing a man with a single punch, OK! can reveal.

Kelsey, 32, is believed to be in the early stages of a relationship with electrician Sean Boggans, 39, after reportedly meeting him when she took a break with friends in Rhodes in September.

It's thought that the pair are tentatively getting to know each other, and taking it slowly following Kelsey's loss.

“It's very early days and no-one knows what the future will bring, but for now, Kelsey is happy that someone else has come into her life,” a source told MailOnline.

The publication also claimed that the builder has two children of his own, and is divorced.

Sean was sentenced to four years in prison after killing a stranger with a single punch.

He was convicted of killing 44 year old Shaun McDermott with a single punch outside a Romford pub.

Sean, who was 30 at the time, was found guilty of manslaughter, a charge he denied, by a jury at the Old Bailey on 17 September 2013.

Metropolitan police said in a statement at the time: “At 0116hrs on Sunday 3 February 2013, borough officers on routine patrol discovered Shaun lying on the pavement outside the Havering Oak public house in South Street, Romford.

“Shaun was taken by ambulance to Queen's Hospital, Romford, where he died at around 1000hrs the following day. A post-mortem examination gave cause of death as head injuries.”

Kelsey was left heartbroken when The Wanted star Tom died aged 33 in March this year following a two-year battle with an inoperable brain tumour.

The pair shared children Aurelia, three, and Bodhi, two together, and got married in 2018, nine years after first meeting on a night out in London.

It comes as Kelsey revealed it was "really hard" returning to the Pride of Britain Awards for the first time without him last month.

Actress Kelsey, who is due to film a six-part documentary about life after losing Tom, said the event was "full of inspirational people" similar to those she had encountered while dealing with her husband's illness.

He was a regular attendee at the Pride of Britain Awards, both with his bandmates and Kelsey, who he appeared on the red carpet with in 2021.

Speaking to the Press Association on the red carpet, Kelsey explained: "It's really hard being back here without him. I didn't realise how hard that was going to be for me.