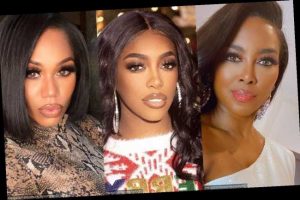 In response to the diss, Porsha has taken to her Instagram account and written about her ‘Real Housewives of Atlanta’ co-star, ‘so all I will say is Kenya I will pray for you over the holidays.’

AceShowbiz –Kenya Moore seemingly is inserting herself in the drama between Porsha Williams, Monique Samuels and Candiace Dillard. The former appeared to throw a shade at Porsha for defending Monique while publicly fighting for Black Lives Matter.

In an Instagram Story post, Kenya wrote, “fake: if you fight for violence against a black woman except the ones who deserved it.” The mom of one didn’t drop any name, but it was likely that she was referring to her “The Real Housewives of Atlanta” co-star as the latter has been making headlines for defending “The Real Housewives of Potomac” star Monique following her brutal brawl with fellow cast member Candiace.

It didn’t take long before Porsha caught wind of the shade and fired back in an Instagram post. “It really is sad that this had to be addressed. Thank you @tamikadmallory my leader and my sister in the struggle for all you do first and for most! However, I will say this I am on Rhoa and most of the show is for entertainment but when it comes to BLM let me be clear I will not be Reading anyone , I will not be shading anyone , I will not stoop down and give weight nor battle the topic of BLM with a fellow black women on TV!” she said in the caption alongside a screenshot of activist Tamika D. Mallory defending her, explaining how genuine Porsha was to fight for Black Lives Matter movement.

“I take it very serious so all I will say is Kenya I will pray for you over the holidays and maybe even I can be a beacon of light in your dark heart when it comes to anything Porsha related or maybe I can enlighten you on the act of *Civil disobedience,” Porsha continued. “I truly hope that in next week episode you are not questioning nor belittling the efforts of the very brave women and men all over the world who stood up and said No justice No peace and have to fight because innocent black men and women are being killed! I know we can do better than this.”

Fans seemingly were in Porsha’s side as one blasted Kenya, “Kenya been hating on porsha since she met her.” Another person claimed, “She mad cuz porsha carrying the middle peach this season.”

“Kenya is always so negative. It’s literally draining,” someone noted. A fan of Porsha added, “I’m team Porsha she handled this classily.”

END_OF_DOCUMENT_TOKEN_TO_BE_REPLACED

END_OF_DOCUMENT_TOKEN_TO_BE_REPLACED
We and our partners use cookies on this site to improve our service, perform analytics, personalize advertising, measure advertising performance, and remember website preferences.Ok