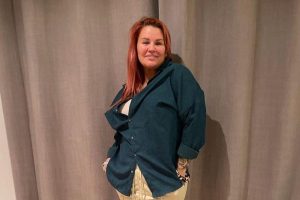 The former Atomic Kitten star is going to stay away from work for a whole month after surgeries later this month in order to focus on her family and recovery.

AceShowbiz –Kerry Katona has decided to take “the whole of January” off work. The former Atomic Kitten singer – who is scheduled to undergo “corrective surgery this month” – plans to give herself “time to recover” while she is keen take a break from other commitments after a “busy period.”

“Before the madness begins and I go back into work mode, I’m taking the whole of January off. I’m having corrective surgery this month with Pall Mall Cosmetics after undergoing a tummy tuck elsewhere last year, and I’m also having an eyelid lift. So I need to allow myself time to recover. I also really need some time out after such a busy period,” she wrote in her column for new! magazine.

Meanwhile, Kerry is keen to focus on her family for a few weeks, and “get back into [her] routine.” She added, “I want to be at home and spend some quality time with [fiance Ryan Mahoney] and the kids. Being off work for a month will allow me to get back into my routine and will boost my mental wellbeing.”

As well as the typical Christmas rush, Kerry was also back on stage – although she won’t be treading the boards over the festive season later this year. She explained, “I was really poorly in the run-up to Christmas, but I somehow managed to power through panto and I was thankfully back on the mend for the day.

“I’ve decided I’m not doing to do panto this year. I had a ball and it’s always good fun, but I want a break so that I can spend more time at home with the kids.”

And the 42-year-old star – who has children Molly, 21, Lilly-Sue, 19, Heidi, 15, Max, 14, and Dylan-Jorge, eight, from previous relationships – is also keen to focus on her physical and mental health. She said, “I’ve been so distracted with work, so now I want to focus on myself. I want to be the best version of myself this year.”