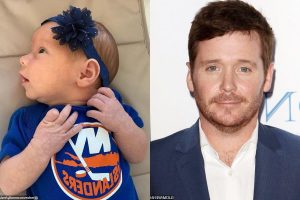 The ‘Entourage’ alum reveals on ‘Victory The Podcast’ that he and his six-week-old daughter Kennedy Cruz contracted coronavirus, but they’re now ‘on the road to recovery.’

AceShowbiz –Kevin Connolly had to deal with one of every parent’s nightmares early on in his journey of fatherhood. The first-time father revealed that his newborn daughter Kennedy Cruz was recently taken to E.R. due to COVID-19.

During an appearance in a Friday, July 23 episode of “Victory The Podcast”, the “Entourage” alum shared with his former co-star Kevin Dillon as well as Doug Ellin that he and his daughter contracted the disease. “I like to think I’m a pretty responsible person, even now that I have a baby. But I don’t know man … whatever this new Delta variant is. F**k man, I got sick,” he opened up.

The 47-year-old star admitted, “It’s been hard,” noting, “Anyone that has a kid knows that it’s hard when your kid is sick, you know? Because there’s really nothing you can do for them.” On how scary it was, he described it, “It’s a close call.”

As for the symptoms that his 6-week-old baby had, Kevin said, “It’s just the congestion part, but the fever is down.” But he is relieved that his baby daughter has been “doing great” as she deals with the illness.

The “Unhappily Ever After” star added that his symptoms were “brutal” but “manageable” thanks to the fact that he’d been vaccinated for the virus. But the worst has passed as he went on assuring, “We’re all back on the road to recovery.”

Kevin and his girlfriend Zulay Henao welcomed their first child in June. “Kennedy Cruz Connolly 🇨🇴 The purest love you can imagine, nothing compares The realest answer I can give to hopefully answer all of your questions/dm’s,” so the Colombian actress posted on Instagram when announcing the baby’s arrival.