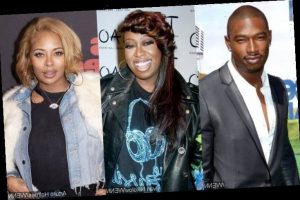 The ‘Naked’ rapper is shading his ex-wife Eva for changing their daughter’s last name to her current husband Mike Sterling’s, claiming that she does it to secure her income.

AceShowbiz –Kevin McCall is bringing down Missy Elliott in his contentious relationship with his ex Eva Marcille. The rapper has resparked affair rumor between the R&B singer and the actress while attacking Eva for changing their daughter’s last name from McCall to Sterling of her current husband Michael Sterling.

Clearly pissed off by Eva’s move, the 35-year-old rapper took to Instagram Stories to insinuate that his child will eventually find out that he’s the real father, he shared a screenshot of the result when searching for his daughter’s info with her new full name on Google. “What age do kids start googling their name?” he wrote over it. “They get better at lying.”

He continued, “I feel sorry for Mike Sterling because he doesn’t know about the trips to Dubai the industry runs through ex models and leave them desperate and have to rely on having children with successful men for steady income and to keep the man…”

While he’s relieved that he’s out of Eva’s alleged scheme, Kevin claimed that his ex has been making numerous lies about him on reality shows. “I got out and my punishment was lies to people with no high school diploma (reality tv watchers) haha I’m made it out alive!” he added. “Poor mike you’ll see in a couple years maybe less. Me and Lance dipped for a reason haha duh.”

Kevin wasn’t the first who claimed that Missy and Eva dated in the past. Back in 2018, “The Real Housewives of Atlanta” star was asked if she warned the “Hot Boyz” hitmaker about the news resurfacing on the show. “No, I didn’t because, I mean, because Missy is so non-confrontational, she’s not that girl,” she told Us Weekly.

She added, “But I did talk to her after ‘Watch What Happens Live‘ and she, first she sends me the emoji of the hand on the head.” Recalling Missy’s reaction, the 35-year-old reality TV star shared, “It was hilarious. And I was like I know, so petty. And she’s like, ‘You know what girl, you held your own. I appreciate it, you know what I mean, the way you held me down.’ I was like, ‘Look, I’m not gonna create a space for you to have to defend yourself against this girl … You’re not on the show. It’s not fair to you,’ which is kind of why I was really pissed off.”

END_OF_DOCUMENT_TOKEN_TO_BE_REPLACED

END_OF_DOCUMENT_TOKEN_TO_BE_REPLACED
We and our partners use cookies on this site to improve our service, perform analytics, personalize advertising, measure advertising performance, and remember website preferences.Ok