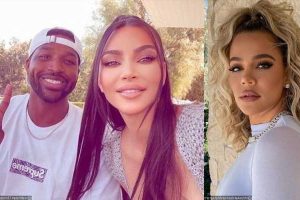 Khloe, who shares a daughter with the NBA star, admits that while the pain ‘doesn’t get easier,’ she has learned to ‘become more numb’ as time goes on.

AceShowbiz –Khloe Kardashian opened up about how she eventually found out about Tristan Thompson‘s paternity scandal. In a new interview with USA Today, “The Kardashians” star shared that she learned of it while filming the new Hulu series.

“That was hard,” Khloe recalled the moment. Kim Kardashian, who broke the news, added, “I think that was hard for me too.”

Khloe shared that the whole thing felt like a “Deja vu” for her, referring to the first time when she had to deal with her basketball player ex’s cheating dramas. “I think the first time it was either [Kendall Jenner] or [Kylie Jenner] that called me. Now it’s good old Kim,” the Good American founder shared.

Khloe added that while the pain “doesn’t get easier,” she has learned to “become more numb” as time goes on. “When you’re hurt so many times – your reactions, your responses to the same thing happening over and over again – there is a numbing sensation to it,” she revealed.

Kourtney Kardashian chimed in, “It almost becomes normal, when it should absolutely never become normal,” while mom Kris Jenner noted how the ordeal caught the whole family off guard. “[Such moments] are a bit shocking, but you’re not really focused on the filming of it at all until you watch it back,” she admitted.

At the end of 2021, Tristan made headlines after Maralee Nichols claimed that he fathers a child with her. Tristan initially denied the claims and allegedly even tried to silence her with money. He eventually acknowledged that he’s the father of Maralee’s child following a DNA test.

“Today, paternity test results reveal that I fathered a child with Maralee Nichols,” the Canadian native wrote via Instagram in January. “I take full responsibility for my actions. I sincerely apologize to everyone I’ve hurt or disappointed throughout this ordeal.”