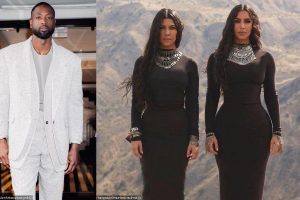 Sylvester Stallone and Kevin Hart are also among celebrities who are issued ‘notices of exceedance’ by the Las Virgenes Municipal Water District for exceeding the district’s water budget.

AceShowbiz -The Kardashians may be one of the wealthiest families in California, but they are still not privileged to unlimited water consumption. Kim Kardashian and Kourtney Kardashian as well as Dwyane Wade, Sylvester Stallone and Kevin Hart have been listed among the biggest names in water waste in the tony San Fernando Valley enclaves of Calabasas and Hidden Hills, while 97% percent of Los Angeles is facing “severe drought.”

These five celebrities were among more than 2,000 customers who have been issued “notices of exceedance” by the Las Virgenes Municipal Water District, indicating they have surpassed 150% of their monthly water budgets at least four times since the agency declared a drought emergency at the end of last year, according to Los Angeles Times. “Customers are expected to adhere to the water use reductions and water conservation measures that are in place due to this emergency,” the notices read.

A property in Hidden Hills listed under Dwyane and his wife Gabrielle Union exceeded its allocated water budget in June by more than 1,400%, or 90,000 gallons. That was an improvement over May, when the property exceeded its budget by 489,000 gallons, more than any other customer.

In a statement to the news outlet, the couple said the excessive usage was caused by an issue with their pool, but it has since been fixed. “We have replaced all parts of our pool system that (have) to do with water flow and leakage in addition to converting to synthetic grass and drought tolerant plants to reduce our water usage,” the former NBA star and the actress said in a statement. “We will continue to work with the city and the water distribution company to make sure this isn’t an issue moving forward.”

Meanwhile, a 2.26-acre property in Hidden Hills owned by “Rambo” star Sylvester and his wife Jennifer Flavin went over its budget by 544% or 230,00 gallons. This was an increase from May with about 195,000 gallons.

The actor’s attorney Marty Singer told The Times that the numbers “mischaracterize and misrepresent the situation regarding the water usage at my client’s property.” The lawyer pointed to the property’s “500 mature trees” that could die if not properly watered.

“My client has been addressing the situation responsibly and proactively. They have let grasses die, and other areas are watered by a drip irrigation system. They also notified the city regarding the mature trees, and are awaiting an inspection and further instruction from the city about how to proceed,” the attorney wrote in a statement. “I am confident that all of the larger properties in the area have similar issues. I therefore trust that my client will not be unfairly singled out in the story because he is a famous person.”

Records also show that Kevin exceeded the budget by 519% in June or 117,000 gallons at his 26-acre Calabasas property. To be fair, water budgets within the Las Virgenes Municipal Water District are tailored to each household. Considered factors are indoor and outdoor use and “specials adjustments,” such as “medical needs” or “caring for horses,” the district’s website says.

Over-consumption of water incurs penalties, which not only include a surcharge on the water bill, but properties are also subject to the installation of a flow restriction device by the third penalty. “What this restrictor does is it completely irradiates the functionality of your irrigation system,” said Mike McNutt said, a spokesman for the water district, adding that 70% of water usage is from outdoor landscaping.