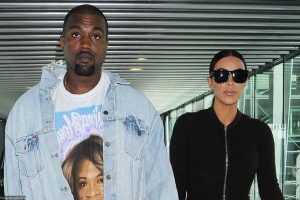 A new report claims that the KKW Beauty founder and the Yeezy designer, who share four children together, are now ‘very civil’ and have ‘mutual respect’ for each other following their public feud.

AceShowbiz –Kim Kardashian and Kanye West apparently have worked things out for the sake of their four children. A new report claims that the former spouses are now “very civil” and have “mutual respect” for each other after ending their public feud.

A source told Us Weekly, “Kim and Kanye have been coparenting very well as of late.” The insider went on to say, “They are very civil with each other right now, there are no issues. They are both treating each other with mutual respect.”

The exes got into a public feud earlier this year after Ye went on social media tirades about Kim and her new boyfriend Pete Davidson. Slamming the former “Saturday Night Live” star, the Grammy-winning rapper wrote in a since-deleted post, “IF YOU SEE SKETE IN REAL LIFE SCREAM AT YHE LOOSER AT THE TOP OF YOUR LUNGS AND SAY KIMYE FOREVER.”

Prior to Ye’s tweet, the “Keeping Up With the Kardashians” alum blasted the “Gold Digger” emcee for his remarks on social media, calling Ye’s “constant attacks” on her “hurtful.” She also stated that “Kanye’s obsession with trying to control and manipulate our situation so negatively and publicly is only causing further pain for all.”

Later in June, the KKW Beauty founder revealed that her coparenting relationship with the Yeezy designer had improved. “It’s going good,” she shared during her appearance on “Today” on June 21. She went on to say that the family celebrated “Father’s Day at the house,” adding, “The kids spent the day with [their dad] and then we had a big Father’s Day dinner and North cooked.”

Reflecting on the family drama, “The Kardashians” star said in a May episode of the Hulu reality TV show, “I think that I will never stop being me. All I can do is control how I react to something. I can’t control how he treats me or how he’s always treated you guys, and I protected that for so long.” She added, “But I said, ‘I will never let that happen to you guys again.’ For once in my life, I feel strong. I’m not gonna let anyone treat you guys [that] way, or myself.”