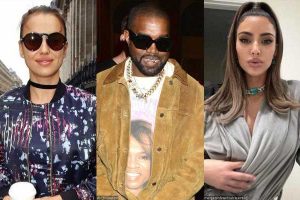 The ‘Keeping Up with the Kardashians’ star reportedly ‘wouldn’t like’ to see her estranged husband embarking on a new relationship with someone ‘who’s going to talk to the press.’

AceShowbiz –Kim Kardashian apparently isn’t bothered by the possible new romance between Kanye West and Irina Shayk. Four months after filing divorce from her third husband, the “Keeping Up with the Kardashians” star reportedly “doesn’t mind” if the “Flashing Lights” rapper embarked on a new relationship as long as “it doesn’t impact her kids.”

Another source told Us Weekly that “Kim knew that Kanye and Irina were dating.” The so-called inside source also claimed that Kim knew the Grammy-winning singer and the model have “been quietly seeing each other for a couple of months.”

“Kim doesn’t mind because she saw how quiet and respectful Irina was after she broke up with [Bradley Cooper],” the insider further explained. While she has nothing against the Russian beauty, the reality TV star “wouldn’t like” to see her estranged husband moving on with someone “who’s going to talk to the press,” according to the source.

Kim officially filed for divorce from Kanye in February after seven years of marriage. Though the 40-year-old reality star decided to part ways with the rapper, she has vowed to love him “for life” in a sweet tribute while celebrating the musician’s 44th birthday. “Happy Birthday Love U for Life!” she captioned an old photo of herself, her estranged husband and her three older kids inside a plane. On Friday, June 4, the TV personality still used her estranged husband’s last name when signing a stunning promotional portrait of herself for a fan.

On the other hand, Kanye was reported to have a one-night French getaway with Irina. Continuing to fuel their romance rumors, the pair were spotted arriving together in the U.S. on Wednesday, June 9. The “Gold Digger” spitter reportedly dashed out of the plane after the Russian beauty and headed straight into an awaiting car.