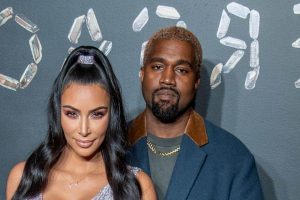 Kim Kardashian reportedly fears her ex-husband Kanye West won't let her move on with her life after her recent split from Pete Davidson.

The beauty mogul called time on her whirlwind romance with Pete, 28, after nine months of dating due to long distance.

And on Monday 8 August Kanye, 45, took a swipe at the Saturday Night Live star on Instagram by posting a fake New York Times cover claiming that "Skete Davidson" was "dead at 28".

A source now claims that the 41 year old SKIMS founder is worried Kanye will cripple her future relationships after she was left stunned by the awful meme.

"Kim's heartbroken over her split from Pete and to have Kanye only add more upset has been a double blow," a source told Closer magazine.

"His bad taste made her realise that he might never let her move on with her life and be happy," they continued.

The pair, who have a 13 year age gap, was said to have been trying to make their relationship work. However, the sress of work commitments as well as their long distance romance led to them cooling off from one another.

A source told Page Six: "Pete is 28 and Kim is 41 — they are just in very different places at the moment.

"Pete is totally spontaneous and impulsive and wants her to fly to New York, or wherever he is on a moment’s notice."

“But Kim has four kids and it isn’t that easy. She needs to focus on the kids," they continued.

The source also cited that ongoing problems with Kanye, the father of Kim’s children, may also have placed a strain on their relationship, as he reportedly “tries to divide and conquer” whenever she is with anyone else.

An insider told People that Pete has been in "trauma therapy" after being left "triggered" by Kanye's online abuse toward him over the past few months. The insider continued: “[Pete] has no regrets for dating Kim and wants it to be made very clear that she's been nothing but supportive of him throughout their relationship… Moving forward he just wants to focus on his career.”

This is one in several incidents in which the rapper has publicly taunted and threatened Pete, and it’s been reported that the US comedian has “sought help” since April,