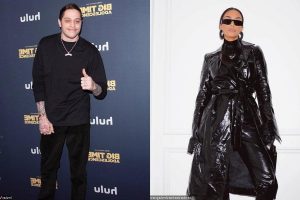 Words are the ‘Saturday Night Live’ star mother Amy and sister Casey have ‘given their seal of approval’ to his relationship with the ‘Keeping Up with the Kardashians’ alum.

AceShowbiz –Kim Kardashian and Pete Davidson are apparently getting serious with their relationship. Just around a month after they were first reported dating, the lovebirds have met each other’s family.

Pete “has already introduced” Kim to her mom Amy Davidson and sister Casey Davidson prior to their recent date night in Staten Island, according to In Touch. A source tells the site Amy and Casey have even “given their seal of approval” to the couple. “They all met up on Staten Island,” says the so-called insider of the meeting, which reportedly took place a couple of weeks ago.

Pete, meanwhile, met Kim’s mother Kris Jenner early in their relationship. Back in November, during his 28th birthday celebration, the pair were seen posing for a picture with the momager at her home in Palm Springs.

Pete and Kim were most recently spotted together in his native Staten Island for a movie date. On Saturday, December 18, the reality TV star and the comedian were pictured walking side-by-side at the Atrium in Staten Island. They were joined by Scott Disick, Scott’s friend Chris Reda and another male friend.

Despite their blossoming romance, some people apparently still disagreed of the pairing. One fan, who bumped into Kim at the theater, did not hesitate to express his disagreement as he told the SKIMS founder that “Kanye’s way better” than Pete as she walked through a movie theater with a bodyguard.

Earlier in the afternoon, Pete was spotted entering a hotel in Manhattan, where Kim is staying. He reportedly arrived with Scott at around 6 P.M., before they left the hotel with Kim’s SUV around 6:20 P.M. and headed toward his native Staten Island. Besides going to the movie theater, Pete took Kim to Angelina’s Ristorante that night. Scott also joined the couple during the dinner.