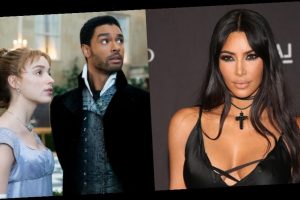 Kim Kardashian is jumping on the Bridgerton bandwagon.

The 40-year-old reality star and entrepreneur finally got a chance to sit down and watch Netflix’s hit series and is already a major fan.

“It’s finally happening!!!” she wrote on her Instagram Story, along with a screenshot of Simon Basset (Regé-Jean Page) and Daphne Bridgerton (Phoebe Dynevor) on her TV screen.

Kim shared her thoughts about the show with fans, and highlighted the ball where Simon and Daphne formed their plan to fake a romance.

Kim isn’t the only big fan of the series. She follows Mila Kunis, Chelsea Peretti, Chrishell Stause, and many more.

If you missed it, there’s a second season of the series coming and the leading lady was just cast. She’ll star with Jonathan Bailey as Anthony Bridgerton searches for his own true love.