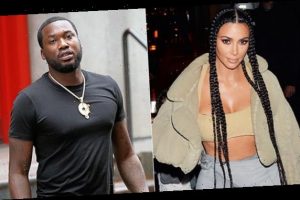 Kim Kardashian’s 2018 meeting with Meek Mill has been making headlines after Kanye West claimed he was trying to ‘divorce’ Kim over it. An insider told us why Kanye was so upset by it.

Kim Kardashian‘s 2018 hotel meet up with rapper Meek Mill “really upset” her husband Kanye West. A source close to the Kardashian clan spoke to HollywoodLife exclusively about the incident that Kanye claimed he was trying to “divorce” her over. “Kim and Meek Mill met at his hotel in 2018 to discuss prison reform because she had her show coming out. When Kanye found out it really upset him, but it was all business,” the insider dished.

The source also told HL that the couple got into an argument about the meeting, which philanthropist Clara Wu Tsai also attended. “Kanye thought there was more going on but there never was and Kim didn’t know why he felt that way. He didn’t know Kim was taking the meeting and they got into an argument over it and he felt disrespected,” the insider said, adding, “Kim never understood why Kanye thought something was going on, but Meek has been very helpful to Kim when it comes to her knowledge on prison reform and helping others and she’s very thankful to him for that. She really respects his opinion.”

Kanye had let the world know that Kim and Meek had a 2018 meet up during his July 21 tweet storm, where he claimed he wanted to divorce his wife ever since the encounter. “I’ve been trying to get divorced since Kim met with Meek at the Warldolf for ‘prison reform,’” he tweeted then later deleted. Ye continued, “Meek is my man and was respectful. That’s my dog Kim was out of line.” Kanye also claimed Kim and her mom Kris Jenner, 64, have been trying to “lock him up,” and Kim later claimed that her husband is experiencing a bipolar episode.