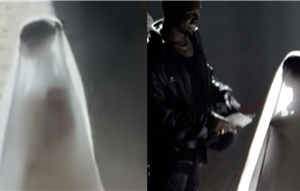 Kanye West’s third listening party for his upcoming album Donda went down last night, and he and Kim…got married? During the event—which was held at Soldier Field in Chicago—Kanye stood on the front porch of his childhood home (which he fully recreated) and casually lit himself on fire. After the flames went out, he was joined by a woman in a wedding dress who definitely looked like Kim—though her face was covered in a long veil. And uh…it kinda seems like they exchanged vows? Hard to tell, but go ahead and let the celeb conspiracy theorist that lives within you spiral because the rest of the internet is right there with you: