Home » Celebrities » Kim Zolciak Reveals What It’d Take For Her To Return To ‘RHOA’: It ‘Would Be Really Fun’

Kim Zolciak Reveals What It’d Take For Her To Return To ‘RHOA’: It ‘Would Be Really Fun’ 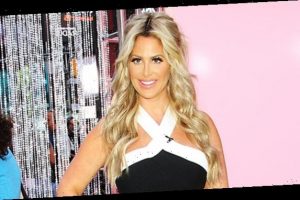 Kim Zolciak looked back on season one of ‘The Real Housewives of Atlanta’ when discussing her time on the series in an interview with Wendy Williams and revealed how she feels about joining now or in the future.

Kim Zolciak, 42, let her fans in on her thoughts about possibly returning to The Real Housewives of Atlanta when she gave an open and honest interview on The Wendy Williams Show on Oct. 6. The Don’t Be Tardy star, who was a regular on the Bravo show for its first five seasons before returning on and off as a guest, admitted that she wouldn’t consider returning unless the show went back to the cast of the first season. “I wouldn’t go back with the cast today, but I think it would be really cool to go back to season 1 and have all the people that did season 1 to kind of do it again,” she told Wendy in the interview.

Today 11am/EST on Fox!! @briellebiermann and I are on with @wendyshow 💕 DONT BE TARDY SEASON 8 PREMIERES TONIGHT!!

“I think that would be really fun to see where everyone is,” she continued. “Like Nene [Leakes], Sheree [Whitifield], and myself had a friendship before prior many years before the show started. That would be fun. I think it’s kind of redundant now, the same thing, same fights and same dinners.”

There’s no word yet on whether or not Nene, who just ended her stint on RHOA, and/or Sheree feel the same about returning to the series, but Kim’s been busy with Don’t Be Tardy, which premieres its eighth season on Oct. 6, anyway, so it’s understandable why she’d be fine with not rejoining the cast. Kim’s own reality series follows the lives of her and her husband Kroy Biermann, 35, and their family and often sheds light on her personal triumphs and struggles.

In the latest preview of the show’s season 8 premiere, Kim’s estranged relationship with her mother is brought up when she and her daughters, including Brielle, 23, and Ariana, 18, have dinner with her aunt Laurie. As they catch up in the clip, Kim starts talking about Laurie’s fudge and cookies, which makes her think about her mom. After Laurie suggests that she could go see her mom in Ohio, she replies with, “I don’t want to see my mother”, making it clear that there’s no change of heart when it comes to the issues between her and her parents, which have been going on for years.

More personal moments from Kim and her family’s lives can be seen on past and new episodes of Don’t Be Tardy. The season 8 premiere airs on Bravo tonight at 10: 30 p.m.

END_OF_DOCUMENT_TOKEN_TO_BE_REPLACED

END_OF_DOCUMENT_TOKEN_TO_BE_REPLACED
We and our partners use cookies on this site to improve our service, perform analytics, personalize advertising, measure advertising performance, and remember website preferences.Ok