Home » Celebrities » King Albert II of Belgium Meets His 'Secret' Daughter for First Time: 'It Is Time for Forgiveness'

King Albert II of Belgium Meets His 'Secret' Daughter for First Time: 'It Is Time for Forgiveness' 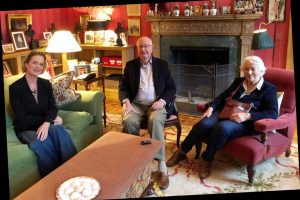 King Albert II of Belgium has met his one-time secret daughter for the first time.

Princess Delphine, 52, who was officially recognized by the ex-King in January following a DNA test, sat with the ex-monarch and his wife Queen Paola at their home in Laeken, Belgium, on Sunday.

In a joint release from the Belgian palace, the trio described the meeting as “a new chapter, rich in emotions, peace of mind, understanding and hope,” reports De Standaard.

“During our meeting at Belvédère Castle, each of us was able to express our feelings and experiences in serenity and empathy,” Albert, Paola and Delphine added.

“After the turmoil, suffering, and injury, it is time for forgiveness, healing, and reconciliation. Together we have decided to take this new path. This will take patience and effort, but we are determined. These are the first steps on a path that we will walk in peace.” The historic meeting represents the final step in Delphine's decades-long fight to be treated as an equal to the three other children of the 85-year-old royal, who abdicated the throne in 2013 citing poor health.

The artist – known previously as Delphine Boël – was born in February 1968 from the 18-year long affair between Albert and her mother Baroness Syibylle de Selys Longchamps.

In 1999, when her existence was revealed, Albert refused to acknowledge her as his daughter, setting off the lengthy legal fight that resulted in the former king being ordered to undergo a DNA paternity test in May 2019.

“King Albert has decided to put an end to this painful procedure in good conscience,” the ex-king's lawyer said in a January statement shortly after the results proved that Delphine was his daughter. This was followed by a court ruling in Brussels on October 2, which decided that Delphine should also be entitled to call herself a Princess of Belgium and carry the family name of Saxe-Coburg, as well as extending the right to her daughter, Princess Josephine, 16, and son, Prince Oscar, 12.

"She is delighted with this court decision which puts an end to a long procedure which is particularly painful for her and her family," Boël's lawyer Marc Uyttendaele said in a statement.

"A legal victory will never replace the love of a father but offers a sense of justice," he added.

Delphine's sitdown with King Albert and Queen Paola comes on the heels of her equally historic first meeting with her half-brother, Belgium's King Philippe, 60, on October 15.

"It was a warm meeting," the pair said in a social media statement signed by "Filip & Delphine".

"This extensive and special conversation gave us the opportunity to get to know each other," they added. "We talked about our own lives and our common interests. This bond will continue to develop in a family context."

The following day Albert and Paola, who are also parents to Princess Astrid, 58 and Prince Laurent, 56, took the unusual step of "unreservedly " supporting the reconciliation in their own joint statement.

"My wife and I are very happy with what has been achieved at the initiative of the King," the royal couple added. "The first signs of better days for all and in particular for Delphine."

END_OF_DOCUMENT_TOKEN_TO_BE_REPLACED

END_OF_DOCUMENT_TOKEN_TO_BE_REPLACED
We and our partners use cookies on this site to improve our service, perform analytics, personalize advertising, measure advertising performance, and remember website preferences.Ok