Home » Celebrities » King Charles Loses His Cool Over a Pen in Viral Video: "I Can't Bear This Bloody Thing!"

King Charles Loses His Cool Over a Pen in Viral Video: "I Can't Bear This Bloody Thing!" 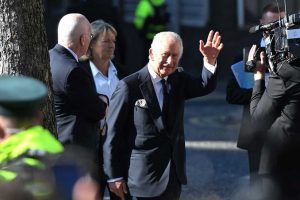 King Charles was caught on camera losing his patience at a leaking pen while signing a guestbook at Hillsborough Castle in Northern Ireland. In a video that immediately went viral for obvious reasons, Charles can be heard saying “Oh God, I hate this thing,” as his pen leaks on his finger. He then hands the pen to Queen Consort Camilla, who muses “Oh look, it’s going everywhere, hang on” to which Charles replies “I can’t bear this bloody thing, what they do, every stinking time” and leaves the room followed by several aides. The first part of the video also includes Charles being frustrated at getting the date wrong (understandable!).