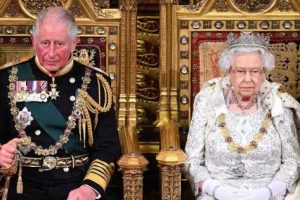 Much like his siblings Princess Anne, 71, Prince Andrew, 62, and 58 year old Prince Edward, the newly appointed King of the United Kingdom and the Commonwealth realms has been left heartbroken by his mum's passing at the age of 96.

Sharing his grief across social media, under the official handle Clarence House, he told his legion of Royal fans: "The death of my beloved Mother, Her Majesty The Queen, is a moment of the greatest sadness for me and all members of my family.

"We mourn profoundly the passing of a cherished Sovereign and a much-loved Mother.

"I know her loss will be deeply felt throughout the country, the Realms and the Commonwealth, and by countless people around the world.”

"During this period of mourning and change, my family and I will be comforted and sustained by our knowledge of the respect and deep affection in which The Queen was so widely held."

Charles and his wife, Camilla, 75, were met with a flurry of sympathetic comments from the public, who mourned Her Majesty Queen Elizabeth II's death alongside them.

One wrote: "She is all I've ever known. The one true beacon of light and hope in this country through crazy times. Rest in Peace Your Majesty. And thank you. We owe you so much".

Another shared: "She was truly loved and will be missed and mourned by many. So sorry for your loss and thinking of all the family. I will be lighting a candle for #TheQueen tonight [red heart emoji] #GodSaveTheKing".

While a third added: "My thoughts are with you and your family. Draw comfort that The Queen is now back with Prince Philip," with a dove emoji.

Unlike his mother, who became Queen unexpectedly at the age of 25 following her father King George VI's sudden death, Charles has preparing his entire life to wear the crown.

As the longest waiting heir apparent and oldest British monarch ever to take the throne, Charles has spent a lifetime attending royal engagements and acting on behalf of the Queen in preparation for the biggest role he'll ever undertake.

And his mum did everything in her power to make the transition as smooth as possible, too, as she shared her dearest wish for Camilla to become Queen Consort in a statement in February 2022.

It was thought that Camilla would be known as Princess Consort when Charles took the throne, following uncertainty over the public opinion around her.

But, in a written message, the Queen said: "I would like to express my thanks to you all for your support. I remain eternally grateful for, and humbled by, the loyalty and affection that you continue to give me.

"And when, in the fullness of time, my son Charles becomes King, I know you will give him and his wife Camilla the same support that you have given me; and it is my sincere wish that, when that time comes, Camilla will be known as Queen Consort as she continues her own loyal service."

Just one month later, it was reported that the Queen had left Buckingham Palace to permanently live in Windsor Castle, with expert Duncan Larcombe claiming the monarch felt it was "less and less home from home" without her beloved husband, the late Prince Philip.

The vacancy would allow Charles and Camilla to move in with ease, solidifying their place as the King and Queen.

With the Queen's passing, Charles is expected to make a public speech and embark on a mourning tour across Britain, Scotland, Wales and Northern Ireland.

Security for the Royal family will be ramped up in protection of terrorism risks, most likely along with Covid-19 regulations, over the course of preparations for the 10 days from the Queen’s death to her funeral located at Westminster Abbey.