Home » Celebrities » Kirk Norcross ‘pleased’ he was one to find late dad’s body: ‘I hugged and thanked him’

Kirk Norcross ‘pleased’ he was one to find late dad’s body: ‘I hugged and thanked him’ 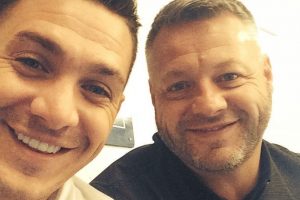 Kirk Norcross has emotionally opened up on the devastating moment he found his father Mick's body and "thanked him" for everything he had done for him.

The former The Only Way Is Essex star has become an ambassador for suicide prevention charity Papyrus after his dad passed away by suicide last January at the age of 57.

Kirk, 34, has now opened up about the heartbreaking moment he smashed a window to get into his father's house before finding his body in the basement.

"In some ways, I'm pleased it was me who found him, but it will be etched in my mind for the rest of my life. I tried to give him CPR, but it was no good," Kirk explained.

Kirk added: "When I realised he'd passed, I lay next to his body, kissed him on the head and said: 'Thank you for everything you did dad and sorry for all I have done. I promise I'll do my best.

"I cuddled him for a while, run my fingers through his hair. I remember it was so soft. It was that moment he died I became a man. I knew I had to try and make him proud."

Kirk, who was one of the original members of ITV's TOWIE when it started in 2010, shared how when lockdown hit the UK in March 2020, work on all his dad's projects came to a halt.

"It was obviously getting to him in hindsight, but like so many, he didn't want to talk about it," Kirk reflected.

"I started seeing signs that he wasn't himself in lockdown," Kirk said, adding that his father swapped his usual attire for grey tracksuits to "mope around the house".

Following his passing, Kirk, who had had problems with cocaine before, said that he even had thoughts of taking his own life, but opening up to his dad's partner helped him work through his difficult feelings.

"After dad died, I planned my own suicide. I wanted to die. I planned what I would be wearing, what I was going to do. I was going to film a bedtime story for my kids. I had to shout myself back from the thought of it, and I went to speak to my dad's partner," Kirk said.

"Immediately talking about it made me feel better, which is something I would urge others feeling like that to do."

Following TOWIE, Kirk appeared on Celebrity Big Brother and Celebrity Love Island but now owns his own jet washing business and says he still tries his hardest to see the positives every day.

Speaking about becoming an ambassador for Papyrus, Kirk said: “Going through something as awful as that means only one good thing which is that you have the experience to help others.

“I have 10 to 20 people message me a day saying they feel suicidal or feel depressed. I try my hardest to give them advice without giving them too much in case it might tip them over the edge.

“It's amazing to know that I might be saving some people’s life. One woman messaged me tell me she was going to end her life the night before but didn't after watching one of my videos online telling people to open up about things.”

If you are feeling suicidal or affected by issues talked about by Kirk then contact Papyrus, www.papyrus-uk.org or call 0800 068 41 41 or contact Samaritans, www.samaritans.org, 116 123.