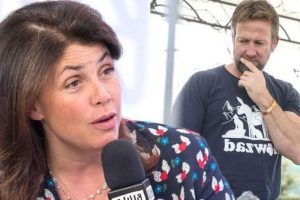 Kirstie Allsopp has today said she has been inundated with abuse on Twitter by fans of Pen Farthing. It comes after the presenter called out the UK for caring more about the ex Royal Marine’s animals than human beings during the Afghanistan crisis last week.

I hope Pen Farthing is proud of his toxic tribe

The Location, Location, Locaton host has now questioned why the founder of the Nowzad Dogs charity has not said anything about the treatment she has recieved.

It was in reply to a simple post about Emma Raducanu’s US Open win last night.

Kirstie responded: “All I did was ask questions about what message was sent about our priorities in the UK, I attacked no one, yet the resulting abuse is unlike anything I have ever experienced on social media.

“I hope @PenFarthing is proud of his toxic tribe.”

Another person soon hit back: “You seem to be obsessed with Pen Farthing. Give it a rest.”

“All I want is for the abuse to stop,” the TV star wrote back.

Explaining herself further, Kirstie tweeted: “If I politely disagreed with someone I would never condone abuse being hurled at that person in my name.

“@PenFarthing has been tagged in numerous unpleasant texts to me, at no point has he asked for restraint.”

She went on: “Abuse is abuse, just because you describe yourself as an animal lover does not mean you are in some way above the rules of good manners and civilised debate which govern decent behaviour.”

One fan told her she would never get respite while remaining on the micro-blogging site.

The star then said: “The extraordinary thing is, that my Twitter experience was remarkably abuse free until this particular gang rocked up.”

Someone else took to opportunity to defend Pen, questioning: “How is this in any way Pen’s fault?

“Some random troll & you want to take yet another opportunity to target Pen? Leave the man alone.”

Saying she had “for weeks”, Kirstie told them: “But he has never said a word about the abuse that has been doled out.

“I would never let this abuse happen in my name.”

When another questioned why she was blaming him, Kirstie added: “If you look at [the troll’s] feed you will see she is a Pen acolyte and this type of random attack is typical of what I have received in the last few weeks.”

Pen has since told Express.co.uk: “I don’t actually know what the tweet is referring to as I had never seen it until now.

“I would never condone or encourage abuse of any kind to anyone. I am still trying to get to grips with the overwhelming love on email and through messenger, so I have definitely not had time to look at Twitter tags.

“Not sure I have ‘fans’ though – our charity definitely has dedicated supporters who made the impossible happen with the success of Operation Ark.”

The soldier made headlines when he put out a plea to save the animals who were being looked after by his charity Nowzad, which he set up while doing a tour of Afghanistan in 2006 with the Marines.

After the fall of Kabul to the Taliban earlier this month, the pet hero vowed to stay in the city until his Afghan staff members and their immediate family members could leave Afghanistan as well, a campaign he dubbed Operation Ark.

Kirstie later wrote online: “If I were left in Afghanistan, or were trying to get a member of my family out, I simply could not conceive how we could get dogs & cats on a plane to the UK but not humans.”