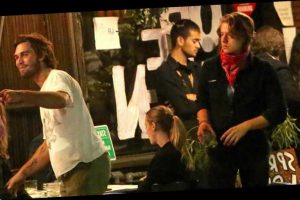 It’s been a while since the Riverdale set has been active, but the cast has been sticking close while waiting to resume filming!

Cole Sprouse, KJ Apa, and Madelaine Petsch were spotted out for dinner with a group of friends on Friday night (June 19) at an outdoor restaurant in Silver Lake, Calif.

PHOTOS: Check out the latest pics of KJ Apa

Last weekend, Cole was spotted at dinner with Madelaine and some other celeb friends as well.

Earlier this week, KJ spoke out after he was criticized for not posting about the Blake Lives Matter movement. He expressed that he does support the movement, but doesn’t feel he needs to post about his opinions and beliefs on social media.