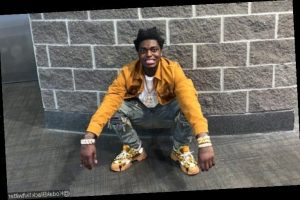 The ‘Zeze’ rapper claims, through his lawyer, that the alleged actions by Marshals Service Chief Mark O’Loughlin caused him embarrassment, humiliation, emotional distress and loss of income.

AceShowbiz -Incarcerated rapper Kodak Black has officially filed suit against a U.S. Marshal involved in his arrest for allegedly leaking a photo to the press.

The “Zeze” MC, real name Bill K. Kapri, recently threatened legal action against U.S. Marshals Service Chief Mark O’Loughlin for violating his privacy by reportedly having his arresting officer snap a picture of Kodak in handcuffs shortly before he was due to perform at Miami, Florida’s Rolling Loud music festival in May 2019.

The image subsequently made its way to a Miami reporter, who had it published in a local paper – all without Kodak’s permission.

Kodak’s attorney, Bradford Cohen, filed a formal complaint with authorities at the time, and while he waits for U.S. Marshals Service officials to investigate the claims, he has decided to take the issue to court on behalf of his client.

He also quotes a Supreme Court judge on the rights of inmates, which reads in part, “Inmates in jails, prisons or mental institutions retain certain fundamental rights of privacy; they are not like animals in a zoo to be filmed and photographed at will by the public or media reporters.”

Kodak was arrested for falsifying information on federal forms to purchase firearms, and faced up to 10 years behind bars before striking a plea deal with prosecutors to serve 46 months in prison, with the following three years on supervised release.

He is also currently serving an additional 12 months for a gun charge in New York, with the sentences running concurrently.